HOW ENGLAND (AND SCOTLAND) MESSED UP IN 1950 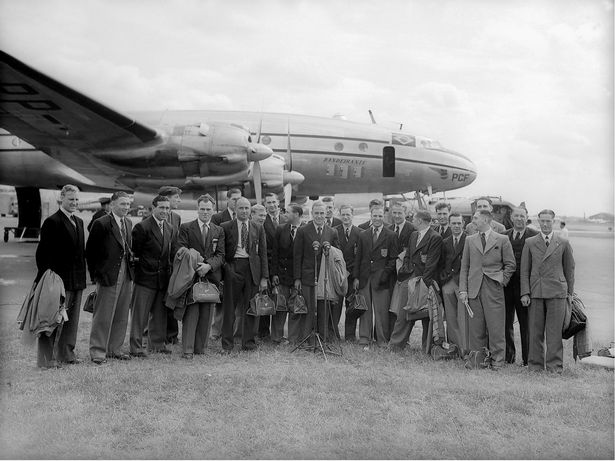 The home nations finally decided to join World football’s showpiece in 1950. And it didn’t go well with Scotland not showing up and England wishing they hadn’t.

‘The English are Best’

The World Cup started in 1930 but England, Scotland, Wales and Northern Ireland came to the combined decision that they didn’t need to beat the rest of the world to prove that they were kings of the game. The home nations had withdrawn from FIFA back in 1920 in the aftermath of World War One and were in no hurry for a reconciliation.

And, at least early on, the decision looked somewhat justified. The home countries, and England in particular, continued to host the best teams on the continent, and occasionally visit them, and proved more than capable of showing they were among if not better than, the elite. A close shave against Austria at Stamford Bridge in 1933 when only a late Jimmy Hampson winner secured the spoils was the exception rather than the rule. The ‘Battle of Highbury’ against Italy brought a 3-2 win, Czechoslovakia were hammered 5-2 in 1937 and England visited Berlin and thrashed Germany 6-3 with a certain Adolf Hitler among the humbled home fans.

After the aforesaid Hitler brought international football to a halt for six years it was business as usual in the immediate aftermath. Wins over Portugal, Italy, Sweden and Belgium, among others, were comfortably achieved.

Finally, after some cajoling from FIFA and the promise of high-end positions in the governing body, the associations of the home international teams were convinced to take part in the game’s showpiece event.

It was agreed that the 1949-50 winners of the Home International Championship would be invited to take part in the 1950 tournament in Brazil and this was eventually extended to allow the runners-up to compete too. However Scottish Football Association chief George Graham announced that the Scots would only make the journey to South America if they actually won the four-team tournament and that if they finished 2nd they would decline the invitation.

Two to Qualify – Unless…

Things started well for Scotland in the Home International tournament. An 8-2 win over Northern Ireland (with Henry Morris of East Fife scoring a hat-trick on what was both his debut and his last game for his country) was followed by a comfortable 2-0 win over the Welsh (where yet another player, Alec Linwood, scored and never played for his country again). With England having also thrashed the two other teams in the competition the stage was set for a Hampden Park decider.

With goal difference not taken into account, Scotland needed merely to draw with the Auld Enemy (who had already made it clear that they were going to Brazil whether as winners or as runners-up) to ensure a share of the crown and a place in South America.

Thus on April 15, 134,000 crammed into Hampden for the big clash. The managerless Scots – their team at that time was chosen by committee – had beaten England 3-1 at Wembley the previous year and had every right to feel confident in front of their own fans. 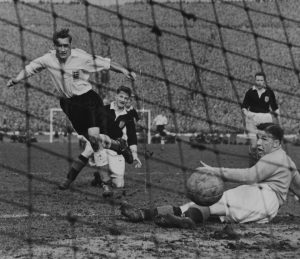 The first half was goalless but in the 63rd minute the deadlock was broken, and it was England’s Bentley who gave his team the lead, beating Cowan with a powerful shot. The Scots bombarded the English goal late on, Bauld hit the bar, Willie Waddell blasted just over, but they failed to find the equaliser and the crown was England’s.

Fans, journalists and players, led by Scotland skipper George Young, pleaded with the Scottish FA to reverse their decision but Graham was adamant that they would not go back on their word and Scotland were out.

The Scots weren’t the only team who failed to turn up for the big show. India had qualified but declined, France were invited after Turkey pulled out but decided that the travelling was too great and Austria claimed that their team was too young to compete. So, instead of the expected 16, only 13 teams competed, including just two in Scotland’s proposed group.

England’s preparations for Brazil can best be described as shambolic. First off, they organised a tour of the USA and Canada to run simultaneously. Countries had to submit a list of 22 players for the tournament and weren’t allowed to deviate from the list. The FA had included Stanley Matthews and Fulham’s Jim Taylor in the World Cup squad and then sent them on the tour of the US and Canada (they made it to Brazil but were left out until Matthews appeared in the third match). Manchester United, also due to tour the States, requested the release of John Aston and Henry Cockburn, refused in Aston’s case. Neil Franklin, the first choice centre-half, left the squad after being offered a contract by a club in Colombia, a country not then recognised by FIFA.

England’s opening match was in Rio so the FA booked a hotel on the Copacabana beach, not ideal for preparations but it didn’t stop them comfortably seeing off a weak Chile team 2-0 with goals from Mortensen and Mannion.

Then it was off to Belo Horizonte and what would surely be a straight-forward win over the US part-timers who had already lost comprehensively to Spain in their opening encounter. The squad stayed at the English-owned Morro Velho gold mine, sixteen miles from the city. 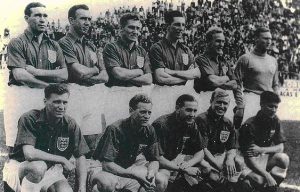 England coach Walter Winterbottom planned on resting some of his top players, deciding unsurprisingly that the big match would be against Spain back in Rio three days later. However, he was overruled by Arthur Drewery of the FA who reasoned that the US game would represent little more than shooting practice. 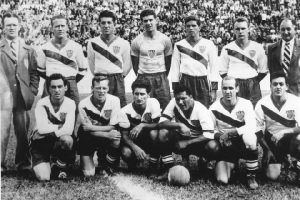 The Americans felt little differently. Led by Scottish-born Bill Jeffrey and captained by another Scot, Eddie McIlvenny they spent a relaxing time in Belo Horizonte including staying up until the early hours on the morning of the match.

The narrow, stony, rutted pitch at the Estadio Mineiro was thought completely unsuitable for top-class football but elicited no protest from Winterbottom or England who were confident that their superior ability would win the day. The dressing rooms were another matter with the team getting changed at the Minas Athletic Club, a ten-minute drive away rather than in the dimly-lit, rat-infested dressing rooms at the Mineiro.

Shortly after kick-off everything appeared to be going to plan. Wolves winger Jimmy Mullen broke through on goal and looked all set to score before the ball bobbled and he lifted his shot over the bar. Mullen’s teammates enjoyed a good laugh at his misfortune. 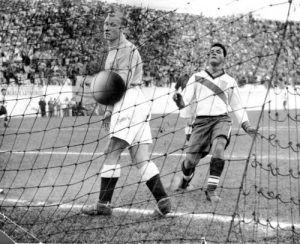 Chances came and went; Tom Finney hit the post, Mannion did likewise and then in the 38th minute the unthinkable happened; the USA took the lead and it came about in a bizarre way befitting the occasion. The US left-half Bahr smashed the ball upfield. It appeared to be sailing harmlessly towards Bert Williams when Joe Gaetjens, in trying to get out of the way, took a stinging blow on his right ear which deflected the ball out of Williams’ reach and into the net.

There were eight pressmen present at the match. Only one, the man from Reuters, had a telephone link to Rio. He sent through the message; “England are losing to a team I never knew played football’.

Things were bad, but with 52 minutes remaining, not yet desperate. England spent half-time on the pitch, listening to the excited chatter of fans. Winterbottom issued instructions and reorganised his team, they attacked almost non-stop throughout the second half but the longer the game went on, the less likely it looked like they’d break through. The post was hit twice more. An American defender appeared to punch the ball clear but no penalty was given. Mortensen was rugby-tackled inside the area and a free-kick was given outside the box. Ramsey hit a screamer that appeared headed for the top corner before Sam Borghi – a keeper said to ‘train on cigars’ – pulled off a wonder save.

And then, in the gathering gloom, it was over and the unthinkable had happened. A combination of bad-planning, bad luck and more than a little arrogance had led to humiliation. Stanley Matthews, sitting in the stands was heard to mutter ‘Oh dear, oh dear’ as the players trooped off the pitch and headed away from the stadium still wearing their kit.

Three days later, back in Rio, came the chance of retribution against Spain in a final game which could still have seen England into a playoff with a win. However, despite four changes including the reinstatement of Matthews, there were clear signs that the shock defeat had left its mark both physically and mentally on the players and they slumped to another single-goal defeat to send them to an early exit.

Further humblings were to follow for England, including a pair of thrashings by Hungary which showed to all that the English had been left behind in terms of tactics, preparation and training.

Scotland meanwhile reversed the decision to only qualify as Home International champions when the same criteria was put in place regarding qualification for the 1954 event. This time they sent a team to Switzerland despite finishing second to England.

Team is almost the operative word. The Scots decided to send 13 players despite being allowed 22, played two matches and lost them both by an aggregate score of 8-0.

Football has come a long way since that first post-War World Cup. Little is now left to chance in terms of preparation and it is impossible to envisage a nation refusing to compete in football’s major tournament for any reason let alone one as trivial as that which denied the Scots their place in 1950.

It’s fair to say that lessons were – eventually – learned.