THEY ALL MADE IT – THE 1958 WORLD CUP QUALIFIERS 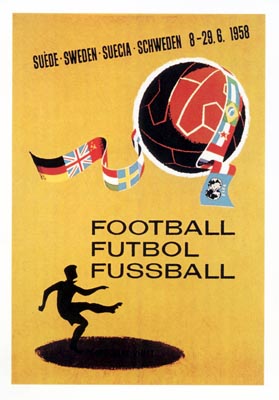 THE sterling efforts of Northern Ireland and Wales at the 2016 European Championships gave some hope for the future of national football across the home nations. But after disappointing qualifying performances for 2018 from Wales and Scotland it still appears it will be a long time until the feat of 1958 is repeated.

For ‘58 all four Home Nations qualified, although there were some bumps in the road

The qualifying draw for the 1958 World Cup finals in Sweden seemed to set a tough task for at least three of the home countries. Scotland would need to overcome Spain and Switzerland, Northern Ireland had both Italy and Portugal to beat whilst Wales were drawn with Czechoslovakia and East Germany. For England it was slightly less daunting with the Republic of Ireland and Denmark to get past. 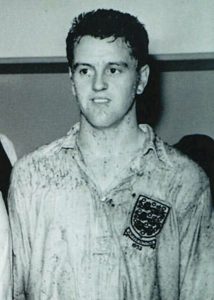 For England, things went just about as comfortably as they could have hoped. They got off on the right foot with a Tommy Taylor (above) hat-trick and a brace from Duncan Edwards securing a 5-2 win over Denmark at Molineux. At Wembley against the Republic of Ireland Taylor was at it again, grabbing another match ball in a 5-1 thumping, John Atyeo bagged the other two.

England went to Copenhagen for their third match knowing one more win would secure their place and Taylor duly delivered again, scoring twice with further goals from Atyeo and Johnny Haynes bringing a 4-2 win and securing their ticket to the finals. A draw in Dublin in the last match made no difference to the final standings. 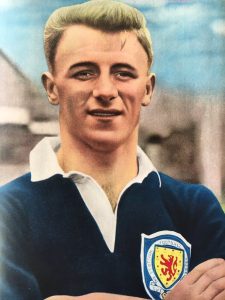 Star-studded Spain, including the naturalised Alfredo Di Stefano and Ladislao Kubala barred Scotland’s way to the finals but the Scots were helped in the group’s opening match when Switzerland grabbed a shock draw in Madrid.

The big result though came in the next match when the Scots entertained Spain at Hampden Park. The 88,000 plus crowd saw Blackpool star Jackie Mudie give the home team the lead. Hungary-born Kubala levelled things then South Africa-born John Hewie regained the advantage for the Scots from the penalty spot. Luis Suarez restored parity again but two further strikes from Mudie gave him a hat-trick and his team the win.

That great peorformance was followed by another when the Scots prevailed 2-1 in Basle, goals from Mudie and Clyde winger Tommy Ring securing the spoils. However a 4-1 defeat in Madrid left them needing to win their final encounter against the Swiss to secure their place in Sweden.

For their final match ‘only’ 58,000 showed up at Hampden to see skipper Tommy Docherty (above) lead his team out. As ever with the Scots, it wasn’t straight-forward. Another Clyde man (and later in life Ally McCoist’s science teacher) Archie Robertson put them in front, Ferdinando Riva equalised. Mudie restored the lead and Roger Vonlanthen levelled it again. Finally it was Rangers – and later Everton – winger Alex Scott who put Scotland in front for good and booked their ticket to Sweden. 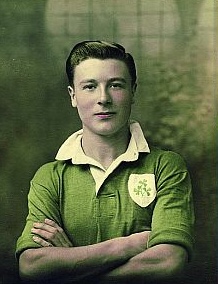 Northern Ireland showed grit, and perhaps had a little good fortune, to make it out of their group. After drawing in Lisbon where an early Billy Bingham goal was cancelled out, and losing by a single goal in Rome in their first two matches a initial tough ask seemed like it had become near-impossible. But the Irish overcame Portugal easily with goals from Tommy Casey, Billy Simpson and Jimmy McIlroy (above) and then sat back and watched their two rivals each beat the other at home meaning everything hinged on the last match.

The game against Italy was initially due to take place on 4 September 1957 but the referee was fogbound in London and unable to fly to Belfast. The teams played a friendly instead which finished in a 2-2 draw with a pitch invasion due to Irish fans’ anger at the roughhouse play of the Italians.

The teams met again on 15 January 1958 with the same ref – Budapest Opera House manager István Zsolt. Goals from McIlroy and Wilbur Cush saw the Irish race to a 2-0 first-half lead. Dino Da Costa, making his first and only start for Italy, pulled one back but Northern Ireland held on, and were through. This was, until 2018, the only time Italy failed to qualify for the finals. 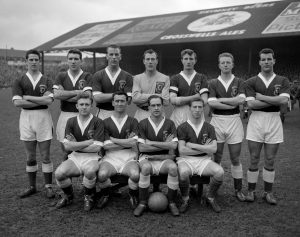 Above: The Wales team that took on Israel at Ninian Park

Wales started their group with a fine home win over the Czechs, with Roy Vernon getting the only goal. But away losses in Prague and Leipzig followed and the Welsh surely must have felt their chance had gone even though they beat East Germany 4-1 in their final match thanks to a hat-trick by Des Palmer, his only three international goals. They finished runners-up in the group and only the winners qualified.

Then FIFA, and Uruguay, and Belgium, handed the Welsh a lifeline.

That Wales eventually made it to Sweden was all thanks to the Suez crisis. Due to the turmoil, Turkey refused to play in Israel so they forfeited, Indonesia insisted that they would only play Israel on a neutral ground, the plea to do so was refused and they forfeited too. Then Sudan followed Turkey’s lead and refused to play the Israelis so, it appeared that they might make it to the finals without playing a single match.

FIFA then intervened, deciding to add a rule stating that teams couldn’t qualify for a World Cup finals without playing a match. This clearly applied to Israel so someone had to play them. Football’s governing body offered first Belgium and then Uruguay the chance to play the Israelis but both turned the chance down. There were reports that these two refused to accept a ‘backdoor’ entry. Neither this nor the continuing problem in the Middle East bothered the Welsh who weren’t about to give up a chance to play on the biggest stage.

The first leg was played in January 1958 in Tel Aviv and, in front of 55,000 fans, goals from Ivor Allchurch and Dave Bowen eased the visitors to a 2-0 win. The return, the following month in Cardiff saw late strikes from Allchurch and Cliff Jones repeat the scoreline and the Welsh were there.

So there it was. Four out of four and all were to be kept apart in the finals due to the creation of a ‘British Pot’ at the 16-team draw.

Soon you’ll be able to read our account of what happened to the Home Nations in those finals with more shocks on the way as Northern Ireland and especially Wales produced great performances that shook the football world.