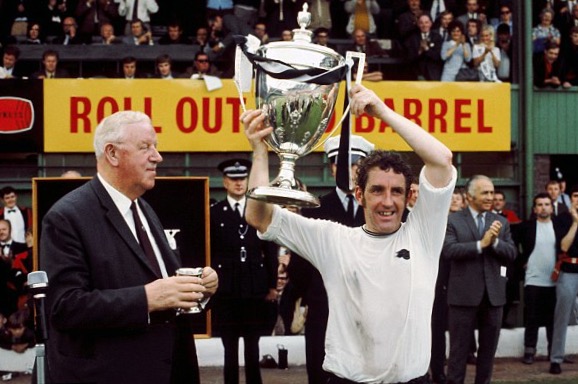 Contested between 1970 and 1973, the Watney Cup (full title Watney Mann Invitation Cup) is fondly remembered as a contest where upsets could, and indeed did, take place.

The competition was played prior to the start of the season (with all matches taking place within eight days) between the two highest-scoring teams from each of the four divisions. Eliminated from entry were teams who were competing in Europe and those who had been promoted. This made it, in effect, a consolation event for those who had scored lots, but failed. Venues were simply decided by the toss of a coin.

One major innovation was brought in for the tournament which has stood the test of time. It was decided that there would be no replays. If matches were drawn they would go straight to extra-time and then penalties. Thus, Manchester United’s semi-final penalty shoot-out win over Hull City became the first tie to be decided in this way in English football. George Best took the first-ever penalty shootout kick – and scored. Denis Law saw his effort saved by Ian McKechnie for the first miss but McKechnie later blotted his copybook by missing the vital kick that saw United progress to the final

Year one went pretty much to plan. The division three and four teams were beaten in the first round, then the first division sides beat those from division two in the semis. 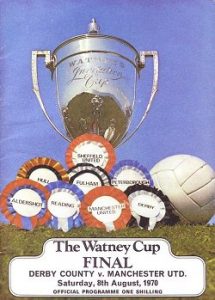 That left Brian Clough’s Derby County and the aforesaid United to fight it out for the final, at the Baseball Ground. County (pictured below with the trophy) romped to a 4-1 victory to become the first club to lift the huge cup.. 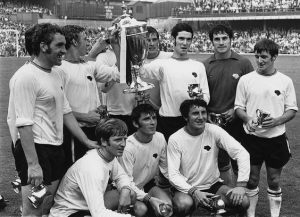 As far as goals were concerned the first tournament lived up to expectations. Seven games saw a total of 31 goals scored (and in fact, in the whole history of the tournament there were only two goalless draws). 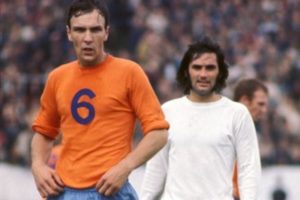 On to year two and whilst goal totals were down, shocks were definitely on the up. Manchester United who had entered for a second time fell to a shock 2-1 defeat  in front of almost 20,000 fans at third division Halifax Town in round one whilst Colchester United of the fourth division knocked out both second division teams, Carlisle United and Luton Town to set up a final against top flight West Bromwich Albion (who had downed Halifax in the semis). 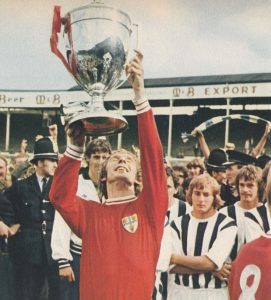 The final, played at The Hawthorns was a thriller. The match finished 4-4 so it came down to a penalty shootout which the minnows of Colchester won 4-3 (with, as you can see above, Albion players looking not too pleased with the outcome). 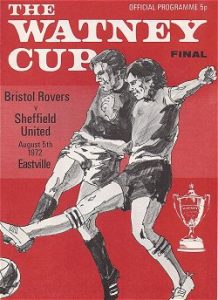 And the following year produced another innovation, and another upset. The innovation was the trialling of an experiment whereby players were only given offside if inside (or in line with) the opposition penalty area.

Manchester United, perhaps chastened by their loss in the previous year’s competition, declined to enter. The upset came when Third division Bristol Rovers saw off top-flight Wolves in the opening round and got the better of second tier Burnley in the semis, both without conceding a goal. The trend continued in the final when they fought out a goalless draw with first division Sheffield United before running out 7-6 winners in a tense penalty shootout. 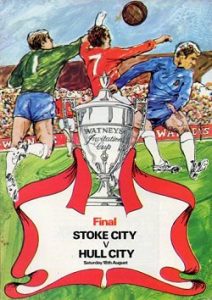 And so to ‘73 and the final year of the event. And the shocks continued in Round One. Holders Rovers saw off top flight West Ham but then succumbed to Hull City in the last four. Stoke City had seen off City, the other Bristol team, in the other semi to set up a home final against Hull. And it was Stoke (led by skipper Jimmy Greenhoff, pictured below with Denis Smith and John Marsh) who ran out winners of the fourth – and last – staging of the event, seeing off their Yorkshire visitors 2-0 thanks to a brace from Greenhoff. 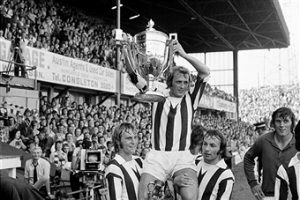 And then, it was gone. Four stagings after starting the tournament was discontinued, after Watney’s involvement ended and a new backer couldn’t be found.. Could it come back? With the majority of top-flight teams now involved in prestigious and lucrative pre-season tours there sadly seems to be no room for it in the calendar anymore. So we’ll have to settle for memories of those four exciting years – and two major upsets – and that massive trophy which I hear is still safely ensconced in Stoke’s trophy room (* I’ve just been informed by reader Andy Ellis that the Watney Cup resides at Derby’s Pride Park).