When Skies Are Grey by Mark Worrall 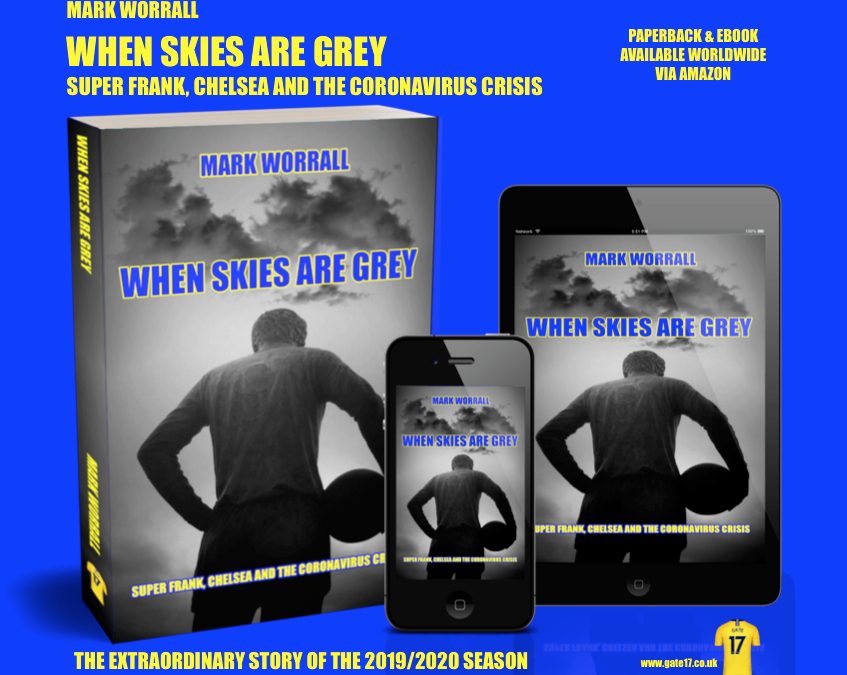 Book Review: When Skies Are Grey by Mark Worrall

What can we make of the 2019-2020 season. Unprecedented? Fractured? A Mess? To some degree it was all of that and more as the campaign was brought to an abrupt halt by the Coronavirus pandemic and then, eventually, restarted with empty stadiums and teams seemingly playing every other day.

In ‘When Skies Are Grey’ (published by Gate 17 books, available on Amazon and Amazon Kindle) author Mark Worrall takes a close look at the season from a Chelsea perspective, although many of the points raised are just as applicable to fans of all teams.

For Chelsea and for Blues fans, it was a hugely important campaign. With the club operating under a transfer ban which no doubt frustrated deep-pocketed owner Roman Abramovich, they had decided to dispense with the services of much-maligned boss Maurizio Sarri despite Europa League success in his only season in charge and appoint club legend Frank Lampard in his place.

The transfer embargo wasn’t the only problem facing the new man at the helm at Stamford Bridge. He would also be operating without the talismanic Eden Hazard who left the club for Real Madrid after inspiring them to one last big-stage success in far-flung Azerbaijan.

It is against this backdrop that Worrall takes us on a roller-coaster ride through perhaps the most tumultuous season in football history – and certainly the strangest.

After a look at Chelsea’s, and their Russian owner’s, record in appointing and dismissing managers the author takes us to the day (in diary form – the book is written this way which makes it so easy to follow), 4th July 2019, when the club appointed Lampard, their record goalscorer, on a three-year contract.

With Jody Morris following from Derby as Lampard’s assistant and with Petr Cech now in place as Technical Director, (other former stars – Claude Makelele and Carlo Cudicini would also return soon after to work with the youngsters and loanees) Worrall said that this day was the one he felt when; “We had our Chelsea back”.

It was a first half of the season full of highs and lows as Lampard and his team, with many players promoted through the academy and some, like Mason Mount, given a pivotal role, and the author guides us through all of this from both his own perspective and from that of others, including the many ‘experts’ giving their valued opinions on social media (usually coming down to ‘sell half the team and buy a new lot’ after a defeat and ‘give them all lifelong contracts’ after a win).

And then came 15th March 2020 and everything came to a halt. Worrall explains going, within a week, from the high of taking his daughter to her first match to the low of not knowing when the next one would be.

Touching on his club’s ‘brilliant gesture’ of handing over their two hotels for use by the NHS, Worrall talks through a troubled time, for football and for life in general as everyone wondered when, and even if, life would get back to normal.

Worrall notes the number of cases and those who had lost their lives, grimly rising during the early summer months as football moves further away out of the social consciousness and other, more serious, matters take over. And then, after 100 days, it was back and the author admits that, despite his misgivings as to the motives of resuming play it’s return ‘boosted my morale’.

And so the reader is guided through the reminder of the campaign as we see his beloved team reach next season’s Champions League, suffer the completion of their hammering by eventual winners Bayern Munich in the current season’s staging and lose the FA Cup final to Arsenal while at the same time making preparations for 20-21 with big-money signings to complement the homegrown talent that flourished during this oddest of seasons.

As Worrall sums up the bizarre season the conclusion reached is that football really can help take those grey skies, and there were plenty of them during the season, away.

When Skies Are Grey is a great read, a reminder that whilst football and your team might not be the most important thing in the world, it can also help you through the times when those more important things take a downward turn.

When Skies Are Grey is published by Gate 17 Books priced at £12.95, is available from Amazon and is also available as an eBook.

£1 from each copy sold will be donated to the Hammersmith and Fulham Foodbank whose primary objective is the prevention or relief of poverty in and around the London Borough of Hammersmith & Fulham.