KUBALA – THE MAN WHO BUILT BARCELONA 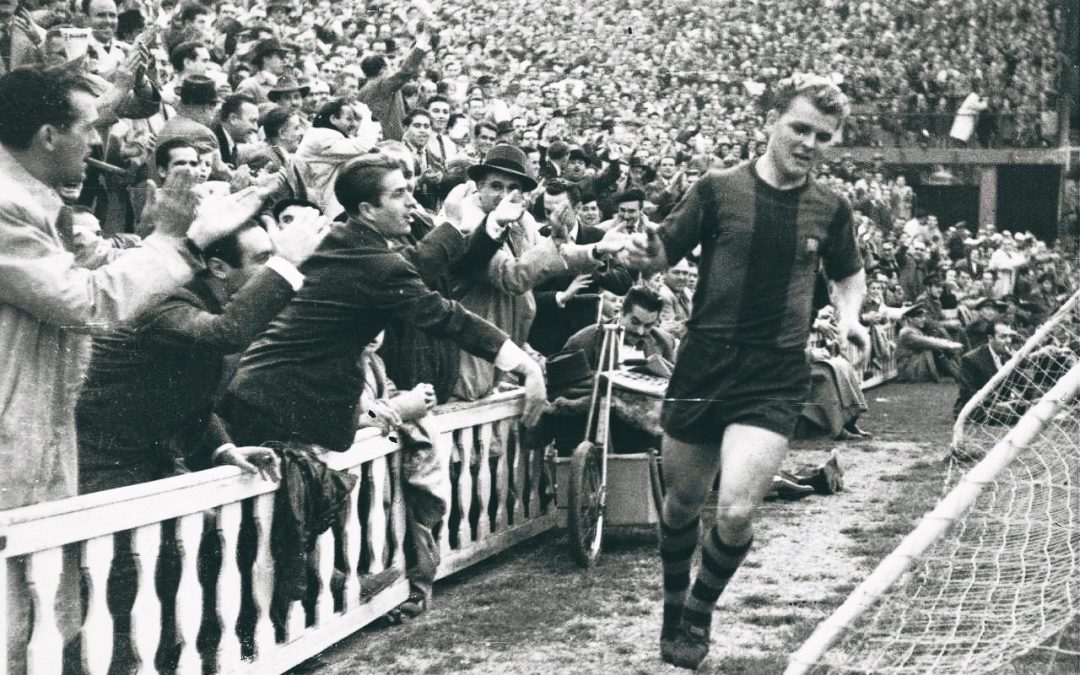 IN 1999, Barcelona’s centenary year, a vote was held to decide the club’s greatest-ever player. Given the exploits since then of Lionel Messi it is entirely possible that were the poll conducted today there might be a different winner

But the fact that followers of a club who had seen Johan Cruyff at his best among many other superstars through the years chose László Kubala says much about just how great he was.

To watch Kubala play, to see his languid approach and ability to send defenders lurching in the wrong direction with a body swerve, is to see the style that the team from the Catalan capital have embodied. It’s football with a swagger, an arrogance that says ‘it isn’t just if you win, it’s how you win’. But alongside this he also had a toughness that enabled him to deal with defenders in the same way he dealt with the many setbacks he suffered in life, shrugging them off and getting on with things.

Kubala was born in Budapest in 1927 and spent his formative years playing against age-groups 3-4 years older. He first joined local Third Division team Ganz TE but was soon performing at a higher level, joining top flight Ferencváros before his 18th birthday.

The forward impressed in his only season he spent with the club winning the Western half of the Hungarian championship although they fell some way short of Újpest in their national championship quest. 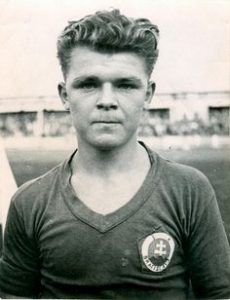 In 1946 he left Hungary for Czechoslovakia, allegedly to avoid military service and signed for Slovan Bratislava linking up for the first time with coach Ferdinand Daucik, who would also become his brother-in-law when Kubala married Daucik’s sister Anna Viola.

Daucik became coach of Czechoslovakia and picked Kubala six times – he scored four goals – before the player returned to Hungary, signing for Vasas and playing three times for the national team.

After a single season back in his country of birth he left again in 1949, this time fleeing in the back of a truck as political and public turmoil raged. The bus dropped him in the U.S. occupied zone of Austria and from there he made his way to Italy, signing for Pro Patria. It is said that his wife and young child eventually met him in Italy when Anna fled the troubles by swimming across the Danube with their baby, Branko, inside a tyre.

Whilst playing in Italy he was asked by Torino to appear as a guest player in a prestigious testimonial match against Benfica in Lisbon to honour the Portuguese club’s captain Francisco Ferreira. After initially taking up the invite he withdrew as Branko was ill. On the way back the plane carrying the team crashed into the Superga hills, killing all 31 on board.

With the conflict engulfing Eastern Europe, Kubala refused to return home to play for the national team resulting in the Hungarian F.A. complaining to FIFA. This led to a one-year ban for the player.

Kubala and Daucik then decided to form their own team, Hungária, made up of refugees from Hungary, Russia, Czechoslovakia and Yugoslavia fleeing the east and in the summer of 1950 the team toured Spain.

Hungária played a series of matches, against a Madrid XI, a Spain XI and RCD Espanyol, and after these, both Real Madrid and Barcelona were keen on signing Kubala. It was Barcelona, and their chief scout and former star, Josep Samitier who won the day. The dealbreaker was the Catalan club’s agreement to employ not only Kubala but also Daucik who became the team’s new coach.

Because of the international ban Kubala, despite signing in June 1950, did not feature for the ‘Blaugrana’ until April 1951. By then La Liga was out of reach (the team finished 4th, five points behind Atletico Madrid) but the lifting of the suspension gave him time to feature in the closing stages of the General’s Cup where he helped his team to victory in the semi-final over Sevilla and in the final against Real Sociedad. He finished the season having made seven starts and scored six goals.

The ban served, Kubala was the difference-maker in the 1951-52 season when Barcelona were far and away the outstanding team in Spain. They proved themselves on all levels winning an unprecedented five major trophies. With players such as goalkeeper Antoni Ramallets, captain Joan Segarra, Nicolae Simotoc, Cesar and, of course, Kubala, Barca took La Liga, the General’s Cup, the Copa Eva Duarte, the Latin Cup and the Copa Martini Rossi. 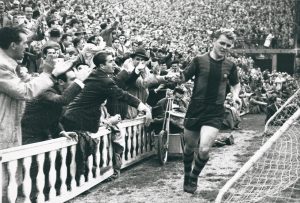 During that wildly successful campaign Kubala set a new record when scoring seven times in a 9-0 win over Sporting Gijón.

The following season was almost as successful with the only blemish coming in the ‘Small World Cup’ tournament played in Venezuela where they finished 3rd behind Corinthians and Roma in a four-team tournament. But domestically they again had no peer, comfortably winning La Liga and doubling up with the Generals Cup, even though they played much of the season without Kubala who had been struck down with tuberculosis and only returned in time to inspire the team for a final push. 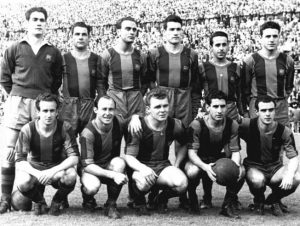 All of these trophies were brought back to the Camp de Les Corts, which had been Barcelona’s home stadium since 1922. But the club, with Kubala leading the way, had by now outgrown it. Capacity had risen from 20,000 to around 50,000 but in the 1950s it was decided that even more space was needed as fans clamoured to see the team and in particular their star man. Thus inspired work to begin on the Camp Nou which would open in 1957.

By 1953 Kubala had successfully applied for Spanish citizenship and he made his debut for his third country for whom he would go on to make 19 appearances, scoring 11 goals.

So it was as a Spaniard that Kubala took the field for the 1953 match between England and the Rest of the World at Wembley, a game played to celebrate the Football Association’s 90th anniversary. He scored twice, once from the penalty spot, in a 4-4 draw.

In fact, for those of you who believe in the Catalonian cause it is possible to make out a case for Kubala having played for a quartet of countries as he made four appearances for a Catalan XI to go along with those for Czechoslovakia, Hungary and Spain. 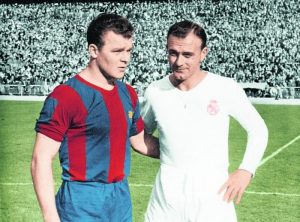 Kubala continued starring  throughout the 1950s, despite suffering a number of injuries which often limited his playing time. With new stars alongside him such as Luis Suarez and a pair of Hungarians he helped to recruit in Sandor Kocsis and Zoltán Czibor, Kubala helped restore Barcelona to the pinnacle of Spanish football with  a pair of titles in 1959 and 1960, and also put them on the European map.

He played a key role in Barcelona’s double success in the first two Inter Cities Fairs Cups. First off they beat a combined London team 8-2 on aggregate. The first match was held at Stamford Bridge and finished in a 2-2 draw with the return taking place in front of 70,000 fans at the now-opened Camp Nou and resulting in a 6-0 win for the home team.

Although he missed both legs of the final through injury,  Kubala scored in the first round against Copenhagen and twice in the semi-final win over Birmingham City.

In the second tournament Barcelona came up against Birmingham again, this time in the final. After a goalless draw at St Andrews, another crowd of 70,000 packed the Camp Nou for the return and home fans were rewarded with a 4-1 victory.

Whilst competing in that tournament for a third time Barcelona, having won La Liga, were also playing in the European Cup for a second time. They had reached the semi-final in 1960 but were hammered 6-2 on aggregate by Real Madrid, a result which saw coach Helenio Herrera, who had fallen out with Kubala and dropped him, fired. 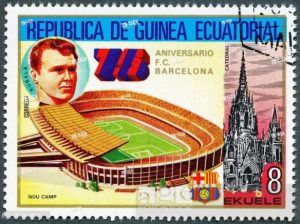 The falling-out between the two came about when Herrera, a strict disciplinarian, attempted to curb Kubala’s heavy-drinking ways. He placed a curfew, which the superstar, a known lover of the Barcelona nightlife, steadfastly refused to adhere to.

By the 1960-61 season the power struggle between the two was over. Enrique Orizaola replaced Herrera at the helm and restored Kubala to the line-up. Although they were eliminated in the Inter Cities Fairs Cup at the Quarter-Final stage they overcame Real Madrid in the second round of the European Cup, becoming the first team to beat their domestic rivals and winners of the trophy for five years in succession, and made it it all the way to the final.

In the 1961 European Cup final, played at Berne’s Wankdorf Stadium, Barcelona came up against Portuguese champions Benfica. Kubala gave his team an early lead but Benfica then scored three unanswered goals before Zoltán Czibor’s late strike which proved a mere consolation. So Kubala missed out on the chance to capture the one major club honour that had eluded him and promptly retired. He ended his time on the pitch at Barcelona and immediately took up a job working with youngsters. By November 1961 he was coaching the first team after taking over from Luis Miró who had lasted just five months in the job. But his time at the helm was trophyless and in January 1963 he left the club and returned to playing with cross-town rivals Espanyol doubling up as manager.

Kubala stayed at Espanyol, where he worked alongside another legend in Alfredo Di Stefano, for two years (giving a professional debut to son Branko) and then had spells in Switzerland with Zürich (playing against eventual winners Celtic in the 1967 European Cup) and Canada with Toronto Falcons both of whom he player-managed before finally hanging up his boots for good in 1967 aged 40.

Kubala then returned to Spain taking charge of Córdoba before an 11-year spell as head coach of the Spanish national team which lasted until 1980. A brief return to Barcelona was not successful and he then coached Saudi Arabian team Al Hilal for three years. Returning to Spain in 1986 he coached at Murcia, Malaga and Elche before working as an assistant with a Spanish team  including Pep Guardiola and Luis Enrique that won Gold at the 1992 Barcelona Olympics.

He made one final playing appearance. In 1993, the newly-refurbished Estadi Olímpic Lluís Companys, which had been remodelled for the previous year’s Olympics, played host to a testimonial match in honour of Kubala. The match was between a Catalan XI and a team made up of foreigners playing in La Liga. Kubala played the first ten minutes for the Catalan team in a match that finished 4-4.

A brief spell coaching the Paraguay national team interrupted his retirement in Barcelona, where he was still a regular, both at the Nou Camp and at the club’s training ground.

His attributes as a player were many but were built around awesome power, a love of teamwork and a cannonball shot. He also revolutionised free-kick taking with the ability to bend the ball around a wall at free-kicks.

Whilst he might not be held in the same esteem as some of the greats of football’s past, there is no doubt that Laszlo Kubala deserves his place among the game’s true legends. And to Barcelona fans he was, and still is, alongside the mighty Messi, the true great.

That he also played a major part in the club’s decision to build their new stadium earns him a position as the man who, perhaps more than any other, ‘built’ Barcelona and went a long way toward making them the force they are in the game today.