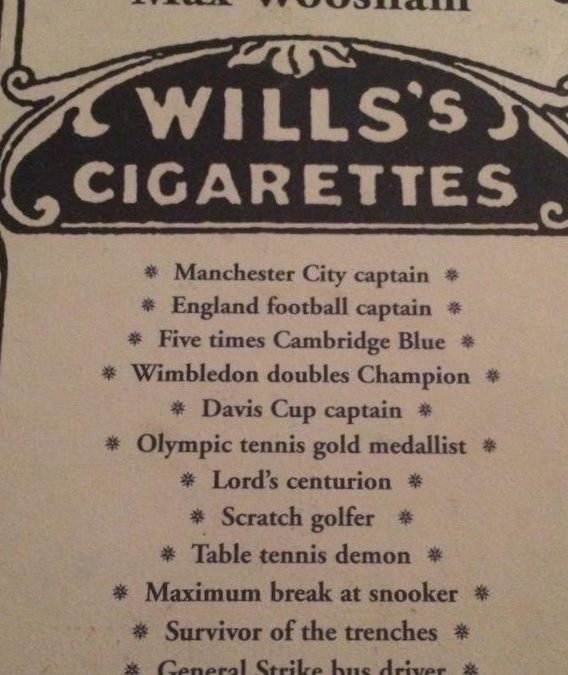 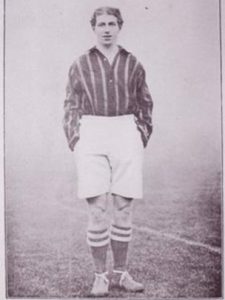 Captain of the England football team and of Manchester City, scorer of a century at Lords, winner of Olympic gold and silver at tennis, winner of the Wimbledon doubles title, captain of the Great Britain Davis Cup team. A maximum break at snooker and a scratch golfer. With a resume like that any other applicants for the title ‘finest all-round sportsman’ really should check out Max Woosnam’s career before applying.

The son of the Archdeacon of Macclesfield, Woosnam was born in Liverpool and spent much of his childhood in Aberhafesp in mid-Wales. He attended Winchester College, appearing for a Public Schools XI at Lords scoring 144 and 33 not out, before going up to Cambridge in 1911, representing the university at football, cricket, lawn tennis, real tennis and golf.

Almost immediately after leaving Cambridge, Woosnam took part in the famous Corinthian tour of Brazil in the summer of 1913 where he scored the first goal in the game against Paulistano of São Paulo and became one of the stars of the team on a tour which revolutionised the international growth of football.

He returned to Brazil the following summer with Corinthian but the Great War broke out as the team was crossing the Atlantic. After a quick walk around Rio, the team set out on the return journey and they had to dodge German U-boats, gunships and torpedoes before making it safely back to England. On his return, Woosnam quickly enlisted with the Montgomeryshire Yeomanry and he fought in the doomed battle of Gallipoli as well as on the Western front earning distinction for his bravery.

After hostilities ceased, Woosnam was based in London for a short time, playing for Chelsea before taking a job in Manchester and almost immediately signing with Manchester City.

In the 1919-20 season Woosnam, a strong, powerful centre-half, initially played just in home matches claiming that work commitments made it impossible for him to travel to away matches. Such was City’s poor form on the road that supporters started blaming his employers who then insisted that he play in away matches too bringing about an upturn in form.

At the end of the season it was back to tennis and a real golden summer. At the 1920 Antwerp Olympic Games he was defeated in the second round of the singles but then won gold in the men’s doubles and silver in the mixed. 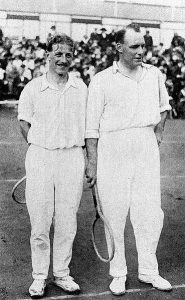 On his return to Manchester he was made captain of City for the 1920-21 season (a rarity for an amateur) and led them to runners-up spot in the First Division before heading to Wimbledon that summer to collect the men’s doubles title with partner Noel Turnbull.

After the tennis success Woosnam was made captain of Great Britain’s Davis Cup team and they went off to play in America where had a famous encounter with perhaps England’s most famous export at the time. 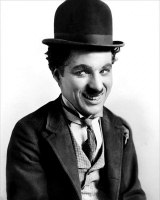 The Tramp. He lost to the Champ

The team were invited to the Hollywood home of the legendary Charlie Chaplin and, after beating him easily at tennis he offered the actor a rematch at table tennis. To give his opponent a chance Woosnam played with a butter knife but he still thrashed him before throwing him in the swimming pool, a combination of events which sent Chaplin scurrying to his room where he stayed until the Davis Cup party had left.

Then it was back to England and back to football and another fine season at City after which he was picked, and chosen as captain, for England’s 1-0 win over Wales at Anfield in what was surprisingly to be his only international appearance. During this time then- City manager Ernest Mangnall said of Woosnam’s popularity; “I have known time after time when the arrival of Max Woosnam in a town has been regarded as a social function in itself. People have swarmed around the team on arrival and have excitedly asked if he were with them”. 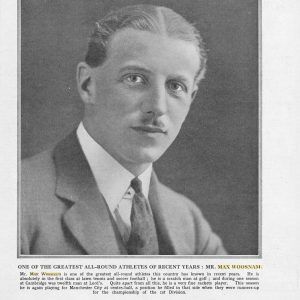 From The Dramatic News 1923

The following season Woosnam suffered a broken leg in a match against Sheffield Wednesday (he reportedly asked stretcher-bearers to stop as he was being carried away so that he could sign autographs). The injury slowed him down considerably and eventually brought his career to an end.

After one more Wimbledon appearance where he reach the semis in the mixed doubles, Woosnam took his leave of top class sport and focused on his business activities. Such was his success here too that he eventually joined the board of ICI.

Woosnam never gave an interview in his life considering it ‘the height of bad manners’ to talk about himself, claimed the idea of turning professional was ‘vulgar’ and perhaps, more than any other individual, epitomised the ‘Corinthian Spirit’ of one who loved football along with all other sports, and played them all with fervour and joy, and for no reward.

That lack of self-publicity sadly leaves us knowing relatively little about the great man himself but there is no doubt that his sporting ability tells its own tale of an amazing man who excelled at every sport he turned his hand to.

Woosnam passed away aged 72, in London in 1965 and the only reminder of perhaps the greatest-ever sportsman is a road close to Maine Road Manchester called Max Woosnam Way.

Surely one day they’ll make a film of his life – and nobody will believe it!

If you want to read more about Max Woosnam, the book ‘All-Round Genius’ by Mick Collins is available from Amazon and all good booksellers. I haven’t read it but I’m sure it’s great! 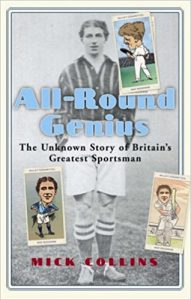