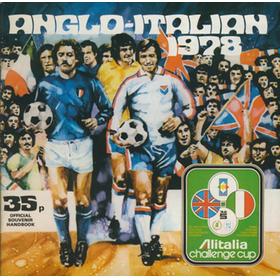 In 1967 3rd Division Queen’s Park Rangers shocked football when beating top-tier West Bromwich Albion to take the League Cup. But what should have been a ticket into Europe was denied the West London team by a UEFA rule that prohibited third-tier teams from playing in continental competitions. 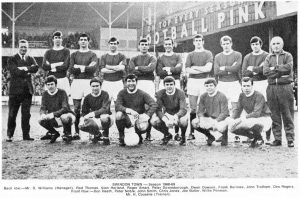 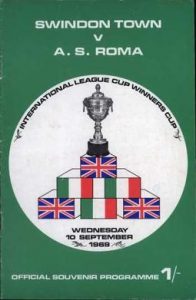 Swindon lost the first-leg in the Stadio Olimpico although a Peter Noble goal in a 2-1 defeat gave them hope for the return. At the County Ground an Arthur Horsfield hat-trick and one from Don Rogers saw Town turn things around emphatically to triumph 5-2 on aggregate.

The Anglo-Italian League Cup as it came to be known, would now be expanded and played five more times. The next two were also between the Coppa Italia and League Cup winners. Bologna won the second staging, beating Manchester City 3-2 over two legs and then Tottenham Hotspur took the crown in 1971 with a 3-0 aggregate win over Torino. 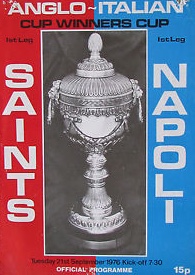 That competition then took a four-year break before returning in 1975 with a change as it was now between the Coppa Italia and F.A. Cup winners. Fiorentina won both games against West Ham United 1-0 to take the first re-staging. The final staging came in 1976 when Southampton took a 1-0 lead to Naples after the home leg but were soundly beaten 4-0 in the return after which it was disbanded.

The initial competition gave agent Gigi Peronace – often referred to as ‘football’s first real agent’ – the idea to stage a regular tournament between English and Italian teams and thus the Anglo-Italian cup was born. It was initially seen (in 1970) as a way of paying players’ wages in an extended close-season due to the staging of the World Cup in Mexico.

The format was a little confusing. There was six teams from each country divided into three groups of four. However, within the group the team’s only met their foreign counterparts, homew and away. All points (including one for every goal scored) were then added up to produce two national ‘group’ winners who met in the final.

Swindon recorded a home and away double against Juventus and also won on the road against Napoli although they lost the home match against the men from Naples. The seven goals Swindon scored saw them finish above Middlesbrough and Wolves, who were both unbeaten, and make it to the final.

The winners of the Italian ‘half’ came from the same group. Naples win two and lost two of their matches but banged in 10 goals which gave them a 14 point haul which enabled them to finish four points clear of second-placed Fiorentina. 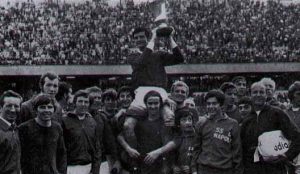 So it was Napoli and Swindon Town who met in the San Paolo Naples in front of 55,000 fans to decide the outcome. The match was marred by crowd trouble but when football was played the Wiltshire club were clearly on top. Peter Noble had scored twice and Arthur Horsfield added a third when the referee, under a barrage of missiles thrown from the terraces, brought the game to an early end after 79 minutes. 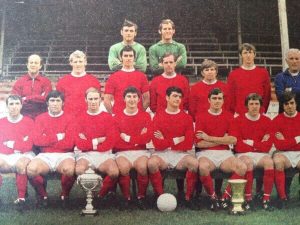 Horsfield‘s third goal had brought a barrage of missiles from the stands and Austrian referee Paul Schiller ordered the players off after a linesman was struck. The Italian fans had, it seems, been incensed by their team’s inability to match their English counterparts.

The 1971 tournament was played with the same format. The English representatives were headed by Swindon once again. Joining them this time were Blackpool, Crystal Palace, Huddersfield Town, Stoke City and West Bromwich Albion. Representing Italy were Bologna, Cagliari, Inter,  Roma, Sampdoria and Hellas Verona. 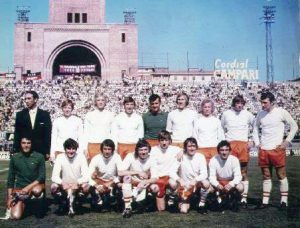 There were some notable performances by English clubs. Crystal Palace drew with Inter at home before beating them 2-1 in the San Siro with a brace from Bobby Tambling whilst Swindon were again impressive, putting four past Sampdoria at home before winning in Genoa. But the holders were outdone by Blackpool who finished with an identical record of won 2 (both of their away games against Verona and Roma), drawn 1 and lost 1 but who outscored their Wiltshire rivals by 10 goals to 9. Opposing them in the final would be Bologna, winners of the ‘Italian side’ of the draw with threes wins and a defeat, and nine goals. 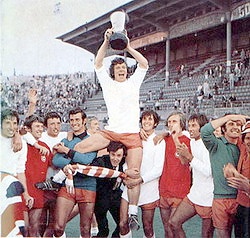 A crowd of 26,000 at the Stade Communale Bologna watched the home team and Blackpool battle to a 1-1 draw with goals from Pace and Craven. In extra-time Micky Burns popped up with the winner for the Seasiders to put some gloss on a season where they had finished bottom in the First Division and lost one of their greatest players with the retirement of Jimmy Armfield.

Blackpool again made it to the final having finished the group stage with an unblemished record that included a quite incredible 10-0 win over Lanerossi Vicenza in their final game. The Italian side of the draw was much tighter with Roma progressing by virtue of the fact that they had scored one goal more than Atalanta.

The final was held in Rome and the hosts became the first Italian team to win the tournament, overcoming the holders 3-1. 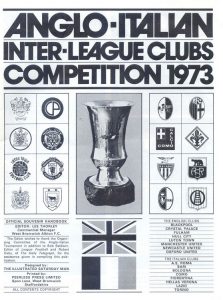 The 1973 edition saw the number of competitors rise to eight from each country. The teams were split into two groups, each playing their foreign counterpart once with the top from each country progressing to a two-legged playoff to determine the finalists. There was another change as the ‘goals scored’ rule was dropped in favour of the more traditional goal average. 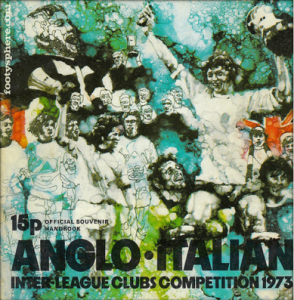 Newcastle United and Crystal Palace made it through to the English final with Palace winning three out of four, and drawing the other to edge out Manchester United. Newcastle won all of their games as did Blackpool but the Mags’ superior goal scoring saw them progress. On the other side Fiorentina and Bologna made it to the semi, Bologna qualifying despite a record of two draws and two defeats. In more than one match there was violence both off and in the pitch and the Hull City v Lazio game ‘deteriorated into a rough and tumble that twice threatened to develop into a wholesale punch-up’ according to one contemporary report.

The first leg of the English semi finished goalless but Newcastle hammered their London rivals 5-1 in the return. Over in Italy Fiorentina made the final courtesy of a 3-2 aggregate win over Bologna. 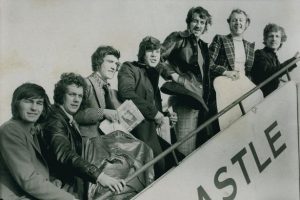 So, Newcastle travelled to Florence for the final (as you can see, all finals were held in Italy) and emerged with a 2-1 win with Tommy Gibb scoring the deciding goal. 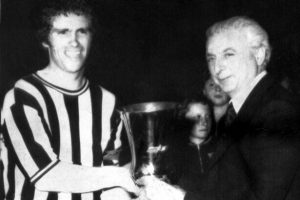 With attendances dwindling and violence both on and off the pitch escalating the competition was disbanded after Newcastle’s win. But three years later it was back.

The reincarnation was competed for by semi-professional teams and was played 11 times. Only one English club was successful during this period, when Sutton United triumphed in 1979. There were name changes during this period as the tournament became first the Alitalia Challenge Cup, then the Talbot Challenge Cup and, in 1981, the Gigi Peronace Memorial in honour of the Cup’s founder who had passed away in 1980. 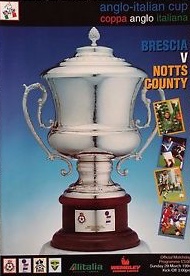 There was one more rebirth for the tournament when it replaced the Full Members Cup and was competed for by second tier teams in 1992-93. Cremonese won the first edition of the revamped event, beating Derby County in the final. The following season saw Brescia beat Notts County.

In 1994-95 the same Notts County became the only English winners of the revamped competition when they beat Ascoli in the final. The last final was played on 17 March 1996 when Genoa beat Port Vale 5-2. The following year the two league couldn’t agree on dates and with crowd violence still causing problems the Anglo Italian Cup became no more. 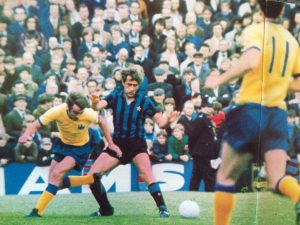 The tournament had thrown up match-ups that seem unlikely these days (Juventus v Swindon Town, Inter v Crystal Palace and AS Roma v Carlisle United spring to mind) and had given fans in both countries the opportunity to see clubs that had only been names in ‘World Soccer’ and newspapers before. Sadly, it will also be remembered for the violence, both on and off the pitch, perpetrated by the participants. With that part of the game now (mostly) a distant memory perhaps there is hope for a rebirth. Sadly, today’s crowded fixture-list and the lack of ‘romance’ in the match-ups it is highly likely that we’ve seen the last of the Anglo-Italian Cup.