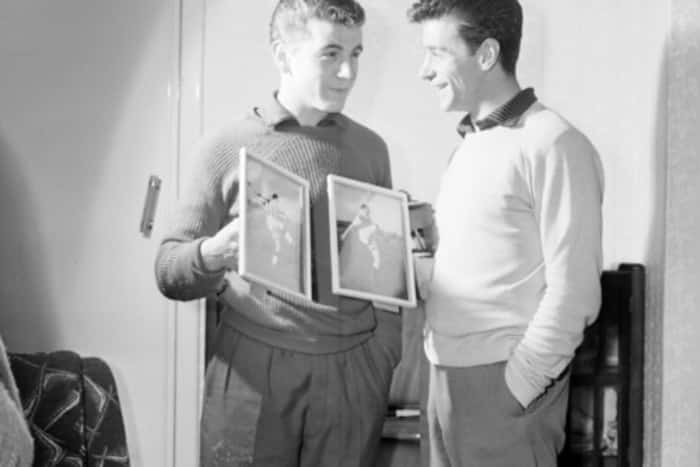 Gerry and Joe Baker were sons of a sailor. Which goes some way towards explaining their convoluted international history.

The Baker’s father was from Liverpool and their mother was Scottish. But son Gerry (Gerard Austin) was born in 1938 in New Rochelle, just over 20 miles north of New York City after his parents had emigrated there. By the time Joe (Joseph Henry) came along in 1940 the family had returned and moved to Woolton, a suburb of Liverpool.

Their father, George volunteered for the Merchant Marines during World War II and survived his boat being torpedoed but died shortly after from the injuries he received. The family were evacuated to Motherwell in Scotland, just six weeks after Joe’s birth and this is where the brothers grew up.

Both brothers were clearly football-mad, and gifted at it, from an early age. Gerry played for Lanarkshire Schools before signing for Larkhall Thistle when he was just 14. He was soon scouted by senior clubs and was moved south in 1955 after being spotted by Chelsea.

Whilst he made youth team and reserve appearances for the West Londoners and seemed to be making good progress, homesickness drove him back to Scotland the following year and then he signed for local team Motherwell. At 5ft 7in he was small for a striker, he had pace to burn and an eye for goal.

Gerry was a promising young striker, but Motherwell were a good side with Ian St John and Pat Quinn as the strikeforce and chances for a youngster proved few and far between. So three years of learning his trade amounted to only 13 matches, and four goals. 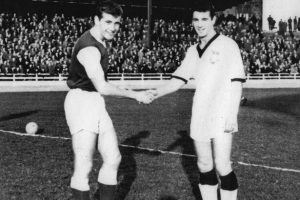 In the 1958-59 season he moved to St Mirren. His debut for his new team came against a Hibernian side that featured brother Joe. Gerry came out on top, making his mark with the winner in a 2-1 victory.

The start was good, but it got better. Gerry scored in every round of the Scottish Cup that year including the third in a 3-1 final win over Aberdeen in front of 102,000 spectators at Hampden. 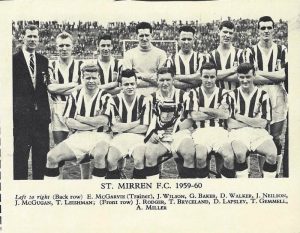 He finished top scorer that season and followed up by matching that feat the following year when his feats included scoring ten times in a 15-0 Scottish Cup win over Glasgow University. By then, clubs south of the border were again taking note of the rising star.

Joe Baker was already attracting attention at the age of 15. He too travelled south and spent a month on trial at Chelsea. Nothing materialised so the Scottish schoolboy cap returned to play for Armadale Thistle before signing for Hibernian. He broke into the first team at 17 after just a handful of reserve game. He had big boots to fill as the legendary Lawrie Reilly had already announced he would be retiring at the end of the season. But within a few weeks he had scored both goals in a 2-0 win over  Queens Park. 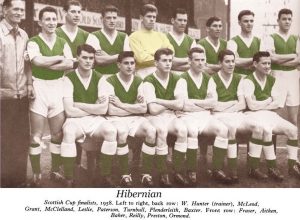 The Baker brothers clearly enjoyed the Scottish Cup as Joe scored nine times for Hibs in their 15-1 win over Peebles Rovers in the competition in 1961. He finished top scorer for the Easter Road club for four consecutive seasons and claimed a single-season record that is unlikely to be broken when netting 42 goals in 33 games in 1959-60.

It was during the 1959-60 season that England, noting his birthplace, picked him, at just 19, to play against Northern Ireland. Starting up front alongside another debutant, Ray Parry, both scored in a 2-1 win. He was the first player playing in Scotland, in fact the first playing overseas, to be picked for England.

With a strong Scottish accent, a Scottish schoolboy cap (he had scored twice in a 2-2 draw with England schoolboys at Hampden) and an employer in Edinburgh, Joe was an unlikely England international. But his pace, ability and phenomenal goalscoring record made him an obvious choice once his place of birth was known. In fact he had already made three under-23 starts before being called up for his debut. 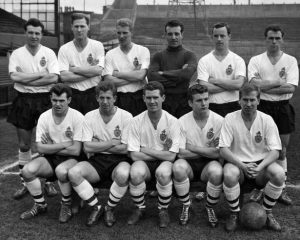 England at Burnden Park before the match with Scotland

He kept his international place for the remainder of the season, appearing against Scotland at Hampden Park then in tour matches against Yugoslavia, Spain and Hungary but was then surprisingly overlooked -at least by the senior squad – for five years. 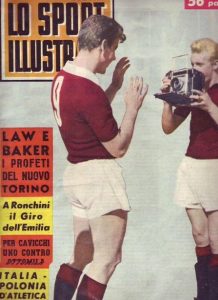 Happy days in Turin for Joe and Denis Law

In 1961 Joe asked Hibs for a pay rise. He was on £12 per week and was looking for a £5 increase. The board refused and, after 159 goals in just four seasons, sold him to Torino for £75,000. He also had the chance to join Fiorentina and would admit later that he made the wrong choice.

Joe’s exploits in Europe had brought him to the attention of foreign clubs. He scored twice at the Nou Camp as Hibs drew 4-4 with Barcelona and added another in the return leg, and then managed three more over the course of two meetings with Roma 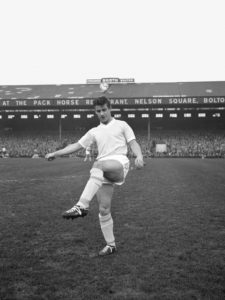 Gerry in his Manchester City days

After 65 goals in 81 games for St Mirren, Gerry Baker tried his luck south of the border for a second time. This time it was to Manchester with City stumping up £17,000 for his services in November 1960.

Again he couldn’t settle, lasting only one season with the Maine Road club and scoring 14 times in 31 games before heading back to Scotland and joining the same Hibs club his brother had just left for a fee of £18,000.

In two seasons at Easter Road, Gerry scored a healthy 43 goals in 83 games before in 1963, heading south for the third time when Ipswich Town offered a healthy £25,000 for his services. 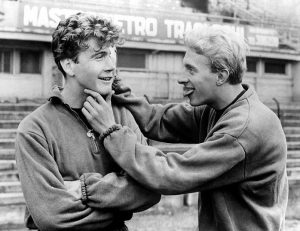 Joe had a traumatic season in Turin. He and Law shared a flat in the city and were unhappy with the intrusion of the press. Of the pair, Baker was more popular with fans but he was sent off for fighting, pushed a photographer into a canal and was fined for missing training. He then crashed his Alfa Romeo and spent six weeks in hospital. All of this resulted in him making just 19 starts for Torino scoring seven goals.

During this time in Italy, Torino travelled to England to play a friendly against a Manchester City team featuring Gerry. Joe scored a hat-trick for the visitors but they lost 4-3 with his older brother netting for the home team.

Talking about his year with Torino, Baker would later say; “I thought Italy would be a great experience and I would earn a lot of money for my old age.

“It was an experience all right – the kind that made me wonder if I’d ever have an old age.

“In one short football season, I was punched, kicked, fined, suspended, sued and had a punch-up on the banks of the Grand Canal in Venice”. 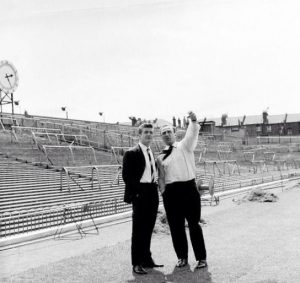 He returned to England in the summer of 1962 when new Arsenal manager Billy Wright persuaded his board to part with a club record £70,000. It was a shrewd move for both club and player. 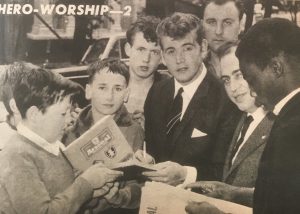 In four seasons at Highbury, Baker scored exactly 100 goals (he was top scorer in three of the four campaigns) and showed, particularly in a bust-up with Ron Yeats of Liverpool which saw both sent off, that despite being the same height, 5ft 7in, as his brother, he was more than capable of handling himself physically at a time when forwards received little help from referees. 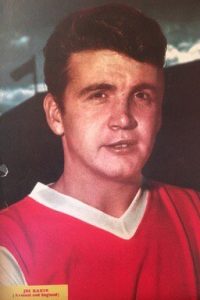 Joe also finally gained an England recall. At the start of the 1965-66 World Cup season he was chosen by Alf Ramsey to replace the hospitalised Jimmy Greaves against Northern Ireland in November. He scored after 18 minutes and England won 2-1 with a late winner from Alan Peacock.

Baker was chosen again for the match in Madrid against Spain. This was the first time Ramsey had employed the ‘Wingless Wonders’ formation and Baker struck again, this time scoring after just eight minutes. Sadly he was injured after 35 minutes and was replaced by Norman Hunter (making his debut at substitute) as England ran out 3-1 winners.

Joe started again in the draw with Poland at Goodison Park in January 1966 and was included in the original 40-man squad for the World Cup. When, in May, Ramsey cut his squad to 28, Baker was left out and this was to be his final involvement with the national team ending his international career with eight starts and three goals. 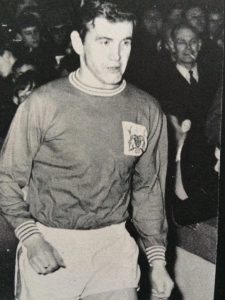 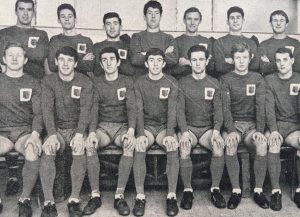 Meanwhile Gerry had been performing well at Ipswich and more than justified that £25,000 price tag. He spent four seasons at Portman Road and scored 66 goals in 151 games.

Gerry’s next move was to Coventry where he was slightly less successful but it was here that he finally won international recognition. The USA, attempting to qualify for the 1970 World Cup finals made him their first overseas-based player when calling him into the squad in October 1968.

He made seven starts for his country of birth and scored twice but they failed to qualify for Mexico and Gerry’s international career lasted barely a year.

He spent a short period on loan at Brentford before being released by Coventry and moving into non-league football player-managing Margate then playing for Nuneaton Borough, Bedworth United and Worcester City before hanging up his boots in 1975. 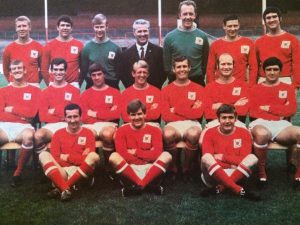 Joe’s move to Nottingham Forest proved a successful one. In his first season the club finished runners-up to Manchester United – featuring Joe’s former teammate Denis Law – in the race for the title and also reached the FA Cup semi-final where they were ousted by eventual winners Tottenham Hotspur.

After scoring close to 50 goals for Forest Joe’s next move was to Sunderland where he spent two years before returning to Hibernian, grabbing 17 goals in 34 games on his ‘return’ and then joined Raith Rovers. When he finally hung up his boots in 1974 he had passed a career mark of 300 goals.

Joe had a couple of spells managing Albion Rovers, ran a pub and worked in matchday hospitality for Hibernian.

In 2003, aged 63, he suffered a heart attack during a charity golf tournament and sadly passed away. Gerry outlived his younger brother by 10 years, passing away in 2013 aged 75 after suffering a stroke. 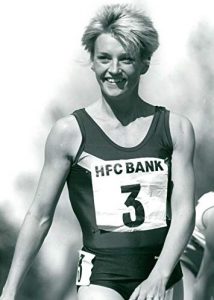 The pace shown by both brothers during their playing careers was clearly in the genes as Gerry’s daughter Lorraine finished 5th in the 800 metres final at the 1984 Olympic Games in Los Angeles.

There is no doubt that in every regard other than their place of birth Gerry and Joe Baker were Scottish. And in more recent times, when rules were relaxed, there is a good chance that they would both have played for the country they considered home. It’s fair to say they were the best Scots never to play for Scotland!

What is also not in doubt is that both were top-class strikers. Though tiny when one thinks of traditional centre forwards, both used their speed and toughness to take on the hardest of defences, and usually came out on top.

Gerry would say after Joe passed away that there was never any animosity between the two. In fact, he remembered criticising a teammate for a hard challenge on his brother when they opposed each other in Scotland. They were, he recalled, more like twins then mere brothers.

It’s highly unlikely that there’ll ever be another brother duo in football like the Bakers. One with so many similarities and so many differences!