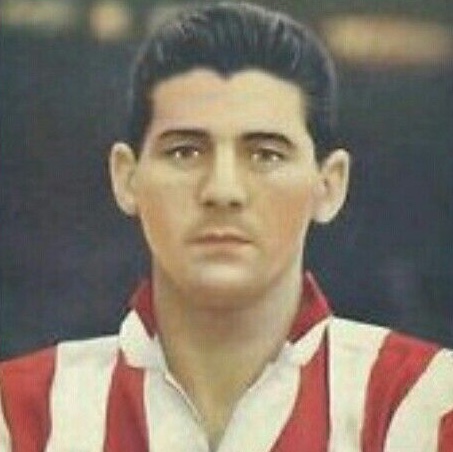 Swansea-born TREVOR FORD was a late starter in professional football due to wartime hostilities.

Ford was born in 1922 and as a youngster he had been made to train for two hours every night by his father who also soaked a football to make it particularly hard then gave his son a boot for his weaker left foot and a plimsoll for the right one, encouragement enough to teach him to become a two-footed player.

Ford had shown enough promise to be chosen for Welsh schoolboy teams (and also at cricket) as a youngster but when war broke out he joined the Royal Artillery and served first as a physical training instructor and later as an anti-aircraft gunner.

After playing as a full-back for local team Tower United as a youngster he was switched to centre-forward whilst playing in the army and was offered a contract by Arsenal after a successful trial. He chose instead to sign professional forms for Swansea Town during the war and returned to his local club at its end. 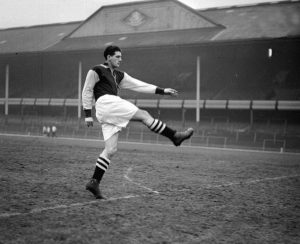 Trevor Ford in his Aston Villa

Ford made his league debut for Swans in 1946-47. In the previous season, the final one before the full organised league returned he had scored 41 times and his potential was quickly spotted when he was chosen for his country in a wartime international against Ireland. He almost joined Chelsea but Aston Villa offered £9,500 plus inside-forward Tommy Dodds shortly after Christmas in that first season and, after Ford had fallen out with the club over his training regime they accepted the bid from the Villa Park club.

Former centre-forward George Edwards moved to play on the wing and Ford was given the job of leading the attack. He flourished playing nine times and scoring nine goals before the end of the season.

Ford’s playing style had little finesse. He once described himself as ‘like an animal’ on the pitch and he took few prisoners. It was stated at the time that he ‘wrought havoc on defences’ and physicality was certainly a key part of his game.

Later in his career, international goalkeeper Gil Merrick, in his autobiography, accused him of maltreating goalkeepers. Ford took issue with the accusation and sued the former Birmingham man, stating that he had never even been cautioned for a challenge let along sent off. The forward sued Merrick and won the case with the ‘keeper forced to pay damages, issue an apology and withdraw the book.

He was often criticised not just by fellow players but also in the press as a dirty player but when this was brought to his attention would simply reply; “It’s a man’s game”. 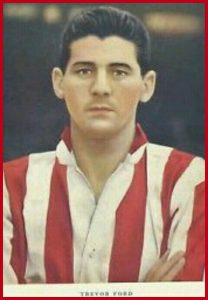 Ford spent three seasons at Villa Park and finished top scorer in every one but the club were mired in mid-table. In October 1950 Sunderland offered a record-breaking £30,000 for the player, and also offered him a new house so he moved to Wearside. What they also offered him was a £250 signing-on fee which was an ‘under-the-counter’ payment and against Football League rules. It would come back to haunt both club and player.

A hat-trick on his home debut, including one where he barged Sheffield Wednesday goalkeeper Dave McIntosh over the line got him off the a flyer. He also managed to break a goalpost and a defender’s jaw ensuring it was a never-to-be-forgotten start to his time at Roker Park.

To supplement his maximum-wage earnings of £15 per week Ford spent his afternoons working for Sunderland chairman E.W. Ditchburn selling cars.

In March 1951, Ford’s transfer-record was broken which, he said at the time, relieved some of the pressure he felt at being the costliest player. Whilst still the record-holder Ford had said; “I hope someone else soon takes over as the costliest player in the game”.

During the 1952-53 season Sunderland turned down an offer for their centre-forward from Italian club Fiorentina which would have seen his salary rocket from £15 per week to £40 plus bonuses. 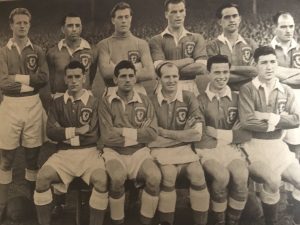 The club continued spending money and fully earning their nickname as ‘The Bank of England’ in an effort to get their strikers, Ford, Len Shackleton and Ivor Broadis the support needed to win the title but they continued to underperform.

Ford was struggling at the time and had fallen out with fellow front-man (and former record buy) Shackleton, claiming that the England international never passed to him. In turn Shackleton said that his teammate lacked the positional sense to make the most of his creativeness. 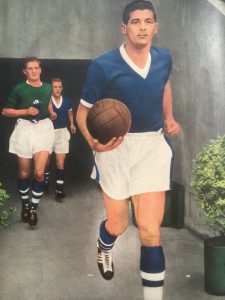 The relationship between the pair was frosty at best. Teammate Stan Anderson would later say; “Shack didn’t like Ford and the feeling was mutual”. Something had to give and the Welshman eventually asked to leave. In 1953 he returned to Wales, signing for Cardiff City for £30,000 at a time when he was out with a shoulder injury. 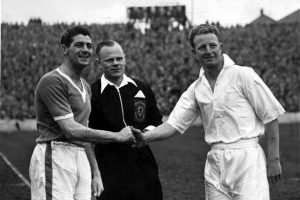 It is easy to look back now and understand why the style preferred by the crowd-pleasing Shackleton and the more workmanlike Ford did not mesh well, especially given their mutual dislike. But at the time is was hard to see why the abundance of stars the club had gathered did not achieve more. 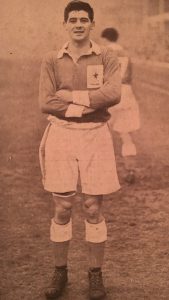 Ford had continued scoring on a regular basis for his country (he would finished his international career with 23 goals in 38 games for Wales) and he did the same for his new club. He fell out with manager Trevor Morris after being asked to play inside-left but this was soon patched up and he continued to lead the line, and put his body on it, for his team.

Now approaching his mid-30s, the publication of his autobiography in 1957 would rock the football world.

Chapter one of ‘I Lead The Attack was called ‘Under The Counter’ and it in Ford outlines his support for the abolition of the maximum wage and detailed a number of ways that clubs, specifically Sunderland, would circumvent the rule including the provision of houses, household goods, phantom jobs and others. This, along with a letter from ‘an insider’ (signed ‘Mr Smith’ but believed to be a disgruntled club director) would lead the Football League to examine Sunderland’s accounts and make some startling discoveries.

One of the finds came in the club’s accounts which showed they had ‘bought’ enough straw to keep the pitch covered for 25 seasons! Effectively the club were paying money for non-existent product then receiving credit notes and taking the money back in cash then using it to pay players extra money in cash.

Ford refused the name the players who received the under-the-counter payments and was banned from the English game along with five other players – the bans were later replaced with lesser sanctions – and the enquiry would also ban three Sunderland directors (including the aforementioned Mr Ditchburn) for life and fine the club £5,000, at that time the largest amount a club had ever been fined. Manager Bill Murray was also fined and he would later resign ending an 28-year association with the club and the following season they were relegated from the First Division for the first time in their history. 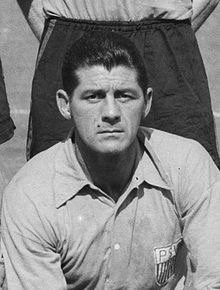 Ford retired, then un-retired and returned to the game a year later. Due to the ban still being applied in England he signed for PSV Eindhoven in Holland.

Ford was taken to Eindhoven by fellow-Brit George Hardwick and although Hardwick left after a year the Welshman stayed for three scoring 21 times in 53 games and playing alongside club legend Coen Dillen.

With his Football League suspension lifted Ford then returned to his homeland, signing for Newport County and when he finally stopped playing league football in 1963 he finished with a goal tally one short of 200 in league action.

Ford briefly tried his hand at non-league football with Romford and Gloucester City and then entered the car trade working in garages in Cardiff, Swansea and Sunderland.

Although he never got to try his hand at top-class Cricket Ford did have one brush with fame in the summer game. At the age of 44 he was attending a Glamorgan game against Nottinghamshire while on holiday when Glamorgan player Ossie Wheatley was injured and had to leave the field.

Ford offered his services  to Glamorgan captain Tony Lewis as a stand-in fielder. The offer was taken up and he spent half-an-hour on the field. This was the game in which Gary Sobers smashed six 6s in an over off Glamorgan bowler Malcolm Nash.

Ford was undoubtedly a top player. The great John Charles once described him as ‘My idol’ which is some statement coming from a man described by many as Wales’ finest-ever player. The trials and tribulations at Sunderland, along with that record fee lead to his footballing ability not always being the first thing that comes to mind when he is discussed but make no mistake, Trevor Ford wa a great centre-forward.