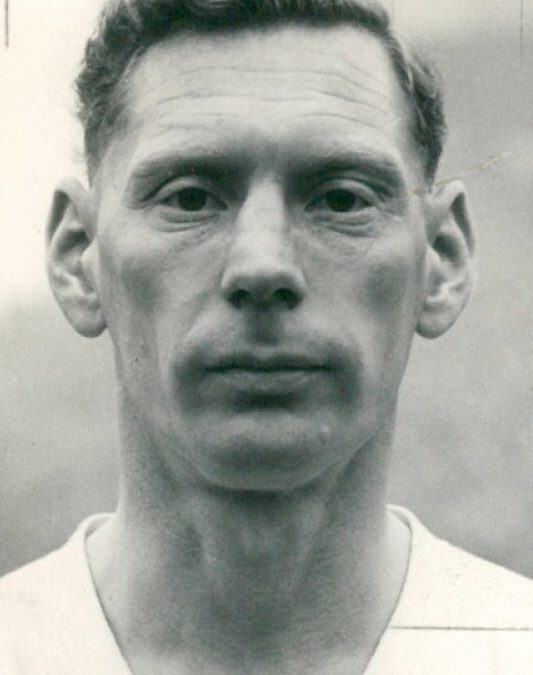 LUTON Town have had their glory days. Few will forget the sight of David Pleat running across the pitch, coat flapping after the club had retained their top-flash status in 1983 and the team at that time included plenty of top players including  Mal Donaghy, Ricky Hill, Paul Walsh, Brian Stein and Mick Harford.

After this came the 1988 Littlewoods Cup final win over Arsenal when the Hatters, now led by Ray Harford but with many of the same players came from 2-1 down with eight minutes left to win 3-2 thanks to goals from Danny Wilson and Brian Stein

But The Hatters had their initial brush with glory in 1959, and one of the major figures in that side was a man who would later go on to be a key member of Don Revie’s backroom team during the glory days of Leeds United.

Syd Owen was born in 1922 within 500 yards of St Andrews and, unsurprisingly, grew up as a Birmingham City fan.

The young Owen had no aspirations of making it to the top of the game although he did play for Birmingham Schools alongside future England goalkeeper Gil Merrick.

Whilst on leave from his army duty during the war, Owen guested for Birmingham, became a regular for the team and signed for them once hostilities ended. It appeared though, that he had no place at St Andrews, making a mere five appearances in peacetime. Both Preston North End and Luton Town attempted to sign him from Birmingham and it was the Hatters who won the race, capturing him for £1500 in 1947. They got their money’s worth.

Owen had played at left-half for Birmingham but he was converted to centre-half by his new manager Dally Duncan and would remain in that position for the rest of his career. 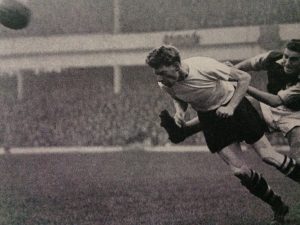 Owen quickly became a regular at Kenilworth Road. Within two years, manager Duncan had recognised his leadership qualities and the former Scotland international made the centre-half captain in time for the 1949-50 season.

It was a struggling side Owen skippered and they were regularly fighting to avoid relegation from the 2nd Division. But his form was such that he was called into the England squad for the Eastern-European tour in 1954. 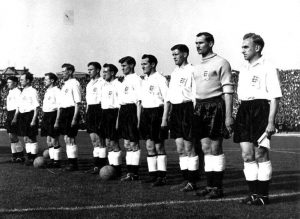 England line up in Budapest. Owen 4th from left

Unfortunately for both Owen and England, that tour didn’t go very well. The centre-half made his debut alongside Billy Wright and Jimmy Dickinson in the 1-0 loss to Yugoslavia in Belgrade. His second cap was alongside the same two, but went much worse as England were thrashed 7-1 in front of 92,000 fans by Hungary in Budapest. 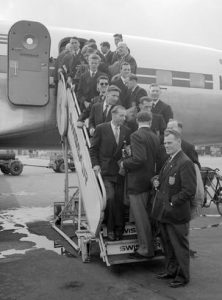 Owen and England leave for the 1954 World Cup

Undaunted by these two failures the selectors chose the same trio for England’s opening match at the 1954 World Cup. That resulted in a 4-4 draw with Belgium after extra time. Owen was injured in the match and spent the closing stages limping out on the wing.

The injury meant Owen wasn’t in contention for the remainder of the tournament, with Billy Wright switching to centre-half and Bill McGarry coming in at right-half. The Luton man was never chosen for his country again. 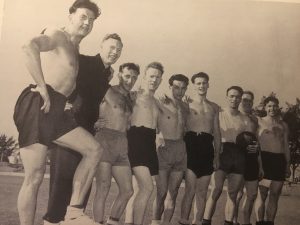 Owen (2nd from left) skippered an F.A. squad which toured South Africa in 1956

The 1954-55 season saw Owen lead Luton into the top flight with a second-place finish behind Birmingham City. They missed out on the 2nd Division title on goal difference but were also promoted on the same rule as City, Luton and Rotherham United all finished on 54 points. 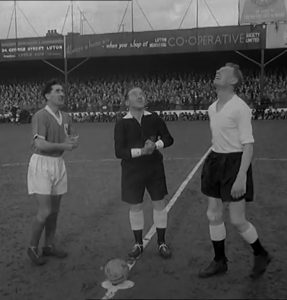 Owen contests the toss with Blackpool skipper Hughie Kelly before the 1959 F.A. Cup 6th round tie

As the 50s were coming to an end so, apparently was Owen’s career. He informed the Luton board that he intended to hang up his boots at the end of the 1957-58 campaign but they persuaded him to stick around for one more season. It proved to be the most exciting of his career. 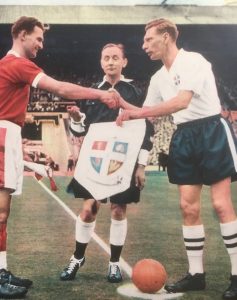 Luton struggled again in the league and would finish closer to the bottom than the top of the 1st Division. But in the Cup they saw off Leeds United, Leicester City, Ipswich Town, Blackpool and Norwich City to reach the final where they met Nottingham Forest. Unfortunately there was no fairytale ending to Owen’s career as his team lost the final 2-1 and the Hatters’ skipper retired immediately after the final having played almost 400 league matches for the club. 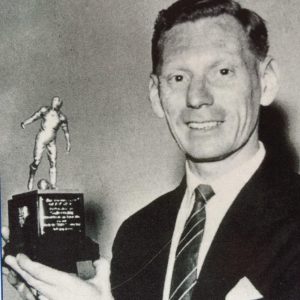 Owen collects his Footballer of the Year trophy

Owen’s fine final season was rewarded when the Football Writers’ Association name him as their Footballer of the Year.

After retiring Owen immediately moved into the manager’s office at Kenilworth Road. He had taken over as player-manager when Duncan left the club for Blackburn Rovers late in 1958 and was effectively working in both roles (although not officially) at the time of the final.

So taking on the role full-time seemed a natural progression. However, he didn’t even see out a season, falling out with the chairman and resigning towards the end of a term that proved a disaster for both team and manager as Luton finished bottom of the table. Towards the end of the campaign he resigned citing the reason as ‘A fundamental disagreement on policy’.

Leeds had been relegated alongside Luton in 1959-60 and continued to struggle under Taylor who resigned toward the end of the 1960-61 season.

Player-Manager Don Revie was the new man in charge at Elland Road and he chose to keep both Owen and Les Cocker, who had also arrived from Luton on the staff. 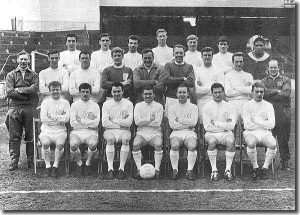 Under Revie, and with Billy Bremner and Bobby Collins bossing things from midfield Leeds became a much more combative side. They received their share of criticism for this but Owen laughed this off, saying at the time; “We have been training to play the game in a hard but fair manner. 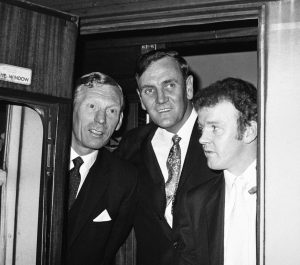 “If the other teams have reason to complain we can’t see why. Our achievements have put some of our rivals in a state of jealousy, but we ignore this”.

Revie, with Owen and Cocker by his side, created at formidable team at Leeds and turned the Yorkshire club into one of the top clubs in the country throughout the 1960s and early 1970s.

Owen played a major role in nurturing the burgeoning talents of Paul Reaney, Terry Cooper, Norman Hunter, Paul Madeley, Eddie Gray, Peter Lorimer and others and was a major part in the Elland Road team’s rise to the top

The fitness fanatic would spend over 15 years at Elland Road outlasting even Revie and was considered a key component in the most successful period in the Yorkshire club’s history.

In fact he spent a very short time at the helm of the club.  After Brian Clough’s brief and controversial time in charge. Owen took charge briefly before the appointment of Jimmy Armfield.

On leaving Elland Road, he first took on the role of assistant to Birmingham City manager Willie Bell, a post he held for 18 months before taking up a similar position at Hull City where he assisted Bobby Collins, but both were gone within months

Next, Owen was appointed youth team coach at Manchester United by Dave Sexton. He would spend three years at Old Trafford and is credited with spotting the potential of a young Welshman called Mark Hughes and giving the striker his first chance.

in 1981 with his 60th birthday Owen took his leave of the game, although he continued scouting part-time for Manchester United before slipping into a well-earned retirement after over 40 years in the game.

Luton Town, Leeds United and even Manchester United all have reason to be grateful to Sydney William Owen. He went through his footballing life with the minimum of fuss and earned the respect of football fans and clubs everywhere. That Footballer of the Year award can be chalked up as one for the ‘littlle man’ and ‘little club’ in a sport where big names and larger-than-life personalities usually prevail.