Johnny Morris’s British record would last almost until the end of 1949. Then in December of that year Preston North End splashed out £26,500 for EDDIE QUIGLEY.

Bury-born Quigley had started out with his local club as a full-back having been spotted playing for local club Radcliffe in a junior cup final by then-Bury boss Norman Bullock. He was switched up front in emergency for a match against Millwall and responded with five goals.

Unsurprisingly, Quigley was converted to the position full time and he proved something of a revelation not just in scoring but in the way he played the game. He is probably the first to play as a ‘deep-lying’ centre-forward in the ‘Wayne Rooney’ mode, and helped make the position a viable alternative to the traditional front man or even at inside-forward which was the position he was more often deployed in.

Just as his playing style wasn’t that used by a normal leader of the attack, so his body shape wasn’t that of a footballer, or a sportsman. Quigley was described as ‘burly’ more than once and he would often look out of place in team line-ups. 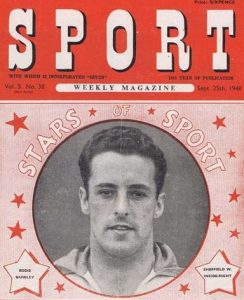 But put him on the pitch and he certainly knew where the goal was. In 1947 Bury sold him to Sheffield Wednesday for £12,000. Quigley would later admit that he would have gladly stayed with the Gigg Lane club but they made it very clear to him that they needed the money and he had little choice but to move on.

The player soon put any disappointment he may have felt at being transferred behind him and enjoyed two fine seasons at Hillsborough, scoring 50 times in 74 games. 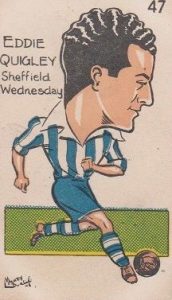 He endeared himself to the Wednesday faithful almost immediately by scoring both goals in a 2-2 draw with Yorkshire rivals Leeds United. 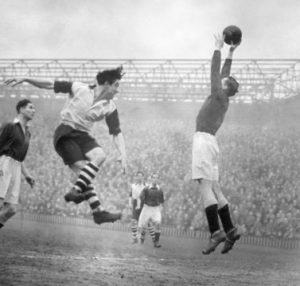 Quigley started the 1949-50 season by scoring 10 goals in 10 games for Second Division Wednesday to keep the Owls near the top of the table. But when fellow contenders Preston offered £26,500, the Hillsborough club decided that it was an offer they couldn’t refuse. 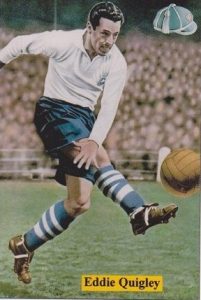 For North End he went on to be part of a 2nd Division title-winning side a season later and was also picked for England ‘B’.  He spent two years at Deepdale before finding himself on the move again. It was hoped that Quigley would prove an ideal foil for the legendary Tom Finney but the partnership never blossomed after a positional switch for the new man, much to his disappointment. ‘When I accepted the move I thought he would mean partnering Tom Finney”, he said. “With Tom beside me I felt certain my play must improve sufficiently to win an international cap.

”However, after four games, I was switched from right to left and never achieved either the link with Tom or the cap”.

With Charlie Wayman cementing his place as the main source of goals for the club the powers-that-be decided that Quigley had to go, and that selling him sooner rather than later would give them a chance of getting a fair chunk of their original outlay back.

So the next move for Quigley was a 10-mile journey to Ewood Park and a drop back down into the second tier when Preston sold  him to Blackburn Rovers for £20,000.

Under Johnny Carey’s management Second Division Rovers played exciting, attacking football with Quigley very much at the forefront. He spent five years at Blackburn scoring 95 goals in 166 matches and earned a couple of England ‘B’ caps before Rovers decided to put him up for sale. 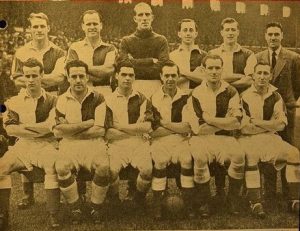 Included in those 95 were 29 in 1954-55 when Rovers hit a phenomenal 114 on the season, centre-forward Tommy Briggs top-scoring with 33. Sadly, the defence was less than watertight conceding 79 and, entertaining though it was, it was only good enough for 6th place in the Second Division.

Later in his career Quigley would bemoan the fact that, although so much money had been paid for him, nobody signed him to play in his best position. “Sheffield Wednesday, Preston and Blackburn all signed me as an inside-forward”, he said. “Very rarely did I get any games at centre-forward.

”Yet I prefer this position because it gives me the chance to use the ball, and is the only position difficult to mark under present playing styles”.

When the Ewood Park outfit initially placed him in the transfer list they set a fee of £2,500 but the Football League deemed that this was too much for a 35-year-old and forced them to reduce it to £1,000. He then returned to Bury for a single season where injury limited him to just 10 appearances and brought an end to his league career with a record of 180 goals in 337 games.

He might have been done with the Football League but Quigley wasn’t done with playing. He moved to Mossley as Player-manager and would carry on before finally hanging his boots up in 1962 at the age of 41.

Quigley then returned to Bury for a third spell, this time as youth team boss where he discovered and nurtured the precocious talents of future England internationals Colin Bell and Alec Lindsay among others. This led to him being given a chance to manage, at Stockport County where he built a team that would go on to be fourth division champions. By then he was gone having moved back to Blackburn Rovers where he was appointed assistant to Jack Mansell. 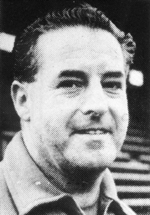 Quigley took charge when Mansell left in February 1967 and would spend over three years in charge while being criticised for an over-reliance on ‘chalkboard management’ and a lack of man-management skills He eventually had his role changed to General Manager / Chief Scout swapping jobs with Johnny Carey who took over as boss.

Rovers were in decline and both were sacked when the club were relegated to the third division for the first time in their history.

Another spell at Stockport followed, where his team knocked his former employers Blackburn out of the League Cup, then came a return to Ewood Park, as chief scout when Howard Kendall took charge at the club, before taking up a similar role at Blackpool then retiring in the early 1980s.