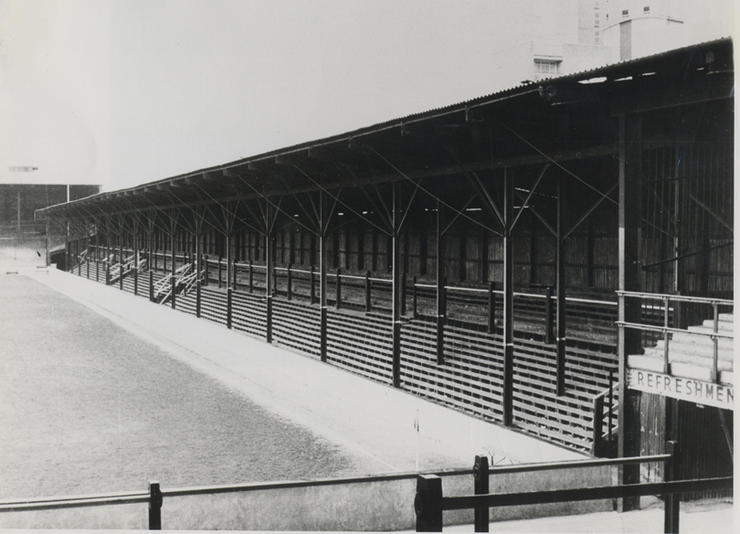 WE left part one of our Upton Park story with the tragic passing of Syd King, a man who had been associated with the club since the Thames Ironworks days.

When King left the club the Hammers didn’t have to look far for his replacement, and it was another long-serving member of staff who took over. 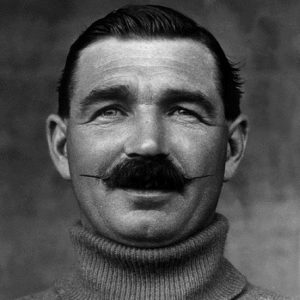 Charlie Paynter has been born in Swindon but his family moved to Plaistow and he started out playing for local teams whilst also developing an interest in physiotherapy. He joined West Ham in 1900 but never made a first-team appearance after a knee injury forced him into early retirement. At the age of just 23 he was appointed trainer to the second-team and when King, formerly the first-team trainer was promoted to manager in 1902 Paynter stepped up as trainer.

Paynter worked alongside King for 30 years and the two were very much a team. Jimmy Ruffell, the speedy winger who joined the club in 1920 and stayed for 16 years said; “Syd King was a good manager but he left most of the day-to-day stuff to Charlie Paynter.

“It was Charlie that most of us talked to about anything. Syd was more about doing the deals to get players to come to West Ham”.

After King was fired, it was Paynter who took over and he would remain at the club for 18 more years giving him 50 years total service, followed by another 20 where he was around the club in some capacity.

Paynter had been chosen to coach England for their first-ever match at Wembley, against Scotland in 1924, and he did a good job with the Hammers. Prior to the Second World War he came close on a couple of occasions to getting the team back into the top flight and during hostilities he led the team to their first Wembley victory, a 1-0 win over Blackburn Rovers in the 1940 War Cup Final.

One of Paynter’s early games in charge was a prestigious – and unusual – friendly match against a Peru-Chile XI. The South Americans were in the midst of a 6-month European tour and had lost to Celtic, Hearts and Newcastle United before arriving at Upton Park. The teams fought out an entertaining 2-2 draw. 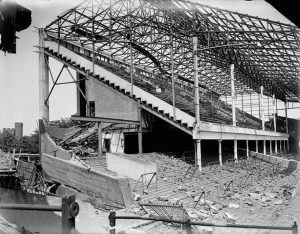 Few changes were made at the stadium in the build-up to World War Two but then a major ‘change’ happened during it. Due to its proximity to the docks there was always a likelihood that Upton Park might suffer bomb damage and in August 1944 a V-1 (more commonly known as a doodlebug) landed on the south-west corner of the pitch causing extensive damage to the South Bank terrace and the Main Stand.

The bomb also affected the club offices with lots of historical documents destroyed. This has led to some confusion over the actual record attendance at the ground. Officially the record figure is the 42,322 who attended a game against Tottenham Hotspur in 1970. Unofficially it is said over 44,000 were at an FA Cup match against Birmingham City in 1933 whilst over 43,000 were said to be at the ground for a second division game with Charlton Athletic in 1934.

Although there were no injuries, the damage resulted in extensive work being needed and the club had to play 14 games away from Upton Park while repairs were carried out.. it certainly didn’t seem to affect the team’s form as they won nine matches in a row. Upon their return to Upton Park they lost 1-0 to Spurs.

When play finally resumed after the cessation of the war little had changed at the ground aside from the repair work to the South Bank and Main Stand, and little changed on the pitch with the club continuing to occupy mid-table places in Division Two. In 1949-50 they came perilously close to dropping down into the third tier and at that time Paynter decided to call it a day. 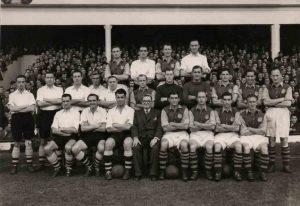 Upon his retirement Paynter was awarded a testimonial. On September 18th 1950, 18,000 fans, including his former neighbour Vera Lynn, arrived to show their appreciation for the man who had taken over from Syd King as Mr West Ham. The match, against FA Cup holders Arsenal, raised £2,000 for Charlie’s testimonial fund, and resulted in a 3-1 win for the hosts.

The 1950 match was, in fact, Charlie’s second benefit game. The club had given him a game in 1904 after he was forced to retire. The opponents that day were also Arsenal and Charlie received £40.

Paynter handed the reins over to Ted Fenton, his assistant and hand-picked successor. Fenton had played for the club for 15 years before leaving for Colchester where he became player-manager before returning to West Ham. 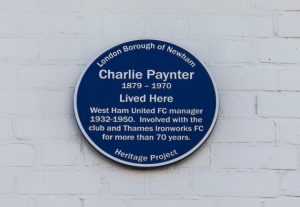 Paynter remained associated with West Ham until his death in 1970, aged 91. He is responsible more than any for the playing style and attitude that the club has been associated with throughout the years.

Turn on the Lights

The 1952-53 season saw the installation of floodlights at the stadium, the lights being launched with two friendlies in five days, against Tottenham Hotspur and St Mirren. Following this there were a number of high-profile friendlies played at the ground and the Boleyn built a reputation as one of the most atmospheric of stadiums under the lights.

One of those prestige friendlies took place in 1954 when the Hammers hosted what was probably their biggest match to date as star-studded Milan visited for a prestige friendly. The Italians charged a hefty fee for the visit and for a time the Hammers considered putting ticket prices up. They eventually decided to charge their normal 2nd Division prices and were rewarded with a bumper 35,000 crowd.

West Ham had their chances in the first half but turned around 2-0 down. In the second period the Italians, led by Juan Schiaffino and Gunnar Nordahl, showed their class and eventually ran out 6-0 winners.

During the 1950s further renovations were carried out to the South Bank but little changed at the ground until the end of the decade when the Final remains of the Boleyn Castle were demolished allowing a new entrance to be built on Green Street.

The 57-58 season started with the Hammers in their usual fairly moderate form. Five defeats by the end of September seemed to indicate another season of mid-table mediocrity, especially after they lost Malcolm Allison who was forced to retire after contracting tuberculosis and having a lung removed. 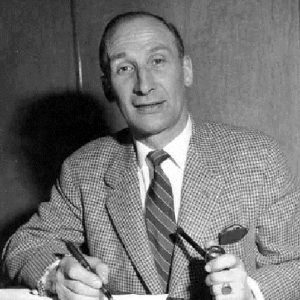 Starting October in 17th place, Fenton splashed out £10,000 on FA Cup-winning forward Vic Keeble from Newcastle and from then on they lost just three more matches. With John Dick, ably backed by Keeble, firing in the goals and with Andy Malcolm outstanding at wing-half gradually climbed the table. After taking over top spot for good in early February they remained there until the end of the season returning to the top tier for the first time in 26 years. 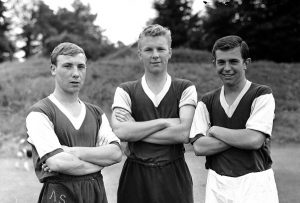 The following campaign was, in many ways, even better. After flirting with the top of the table early on the Hammers eventually finished in 6th place, a position they have never bettered. Not only this, the youngsters reached the final of the F.A. Youth Cup (for the second time in four years) where they lost out to Blackburn Rovers. An indication of the quality of the young team was that seven were England youth internationals and nine would go on to reach the first team while a couple more – Harry Cripps and Bobby Keetch – made their mark elsewhere.

That young side was also the springboard to the first team for two youngsters – Bobby Moore and Geoff Hurst – who would go on to have a huge impact throughout the 60s, for both club and country. Moore had already made it to the first-team in that same season while Hurst was still learning the game at wing-half and it would require a change of position before going on to reach the very top.

A pair of moderate seasons followed until, in March 1961 the club parted ways with Fenton. The full story of Fenton’s departure has never been explained. He was initially placed on sick-leave and then it was announced that he had been dismissed for a ‘behind-the-scenes matter’. 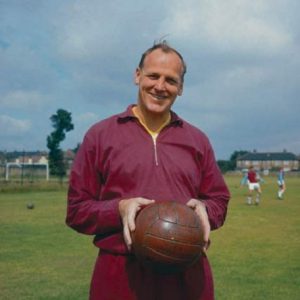 So, West Ham were looking for only their fourth manager in 60 years. And for the first time they went outside the club for the appointment. Former England B international Ron Greenwood, who had been working as first-team coach at Arsenal whilst also managing the England Under-23 team took over at the helm, and was the man who would finally bring some peace-time silverware to the Boleyn boardroom.

Ground improvements continued, albeit still at a fairly moderate pace. In 1961 a roof was added to the North Bank end of the ground serving to increase the amount of noise generated by the club’s vociferous fans, raising the intimidation level for visitors.

Whilst the ground changed little, West Ham’s results were certainly to step up a great deal under Greenwood. Although he ensured that the team continued playing exciting, open football, he added another element to the mix – winning.

So that’s the end of part two of our story of West Ham and the Boleyn Ground / Upton Park. The final part will follow shortly and will cover the club’s best period, with seismic changes – both on and off the pitch.

And, yes we’ll give our definitive answer to that Boleyn/Upton Question!