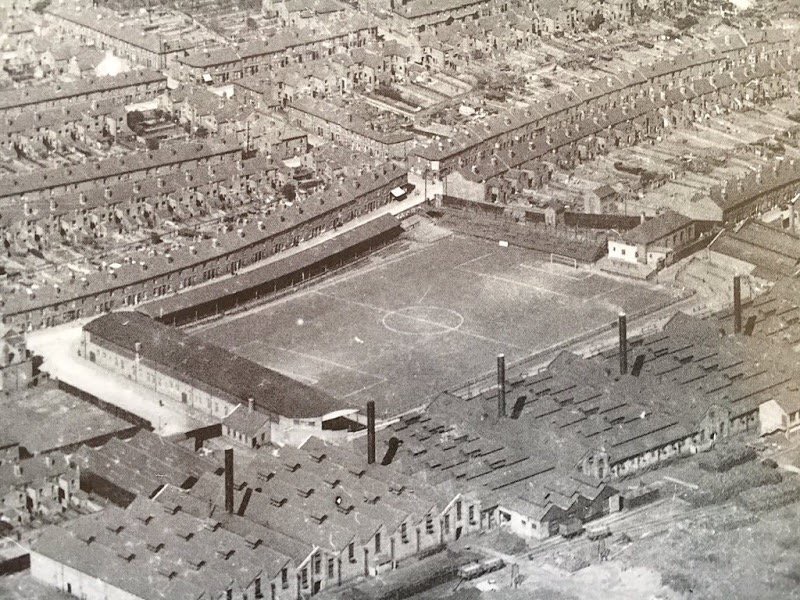 As an offshoot of Derbyshire County Cricket Club, it’s hardly surprising that Derby County began their football existence playing at the County Ground. The ground also held horse racing as well as cricket there, and it was constant clashes with the other sports that led the club to search for a new home.

The Baseball Ground, where the club moved to in 1895, had been laid out by Francis Ley, owner of the nearby Vulcan Works Foundry in the 1880s as part of Ley’s Recreation Ground. Ley had recently returned from a visit to the United States and during his time there had developed a fondness for baseball. 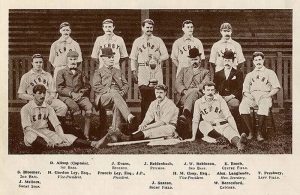 The Derby baseball team. Steve Bloomer is the second baseman.

Ley wanted to bring the sport to England, hence the name of the new ground, but he struggled to find enough interest in his new passion although In their early years Derby County did also participate in the imported sport and, in fact, won the 1897 English Cup with the legendary Steve Bloomer as their star second baseman.

Football though quickly became the dominant sport at the ground. Ley added to his initial outlay to build the stadium, paying for stands to be moved from the County Ground.

Although they had previously used the Baseball Ground on occasions when their schedule clashed with race meetings at the County Ground, Derby officially moved in to their new home at the start of the 1894-95 season winning their first game 2-0 against Sunderland with Bloomer, fittingly, scoring both goals in front of an estimated crowd of 10,000. The club enjoyed a fine first season at their new ground finishing runners-up in the league to Aston Villa with Bloomer netting 27 times

That position would not be bettered until Brian Clough and Peter Taylor led County to their first title over 75 years later. 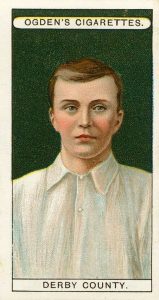 Bloomer, nicknamed ‘The Destroying Angel’ was top scorer in the 1894-95 campaign and would go on to top the charts for an incredible 12 years. In 493 league appearances with the club, in two spells sandwiched with a three-year stint at Middlesbrough he scored a fantastic 291 league goals in 473 games and also netted 28 times for England while winning 23 caps.

In February 1911 the Ground was chosen to host the Home International clash with Ireland. A reported 20,000 turned up to watch the hosts run out 2-1 winners with goals from Newcastle United’s Albert Shepherd and Bobby Evans of Sheffield United.

Derby had long harboured hopes of buying the freehold of their new stadium and, in the early 1920s after talk that they might move to a new home at the Municipal Sports Ground at Allenton, in July 1924 they finally purchased the Baseball Ground from Sir Francis Ley for £10,000. 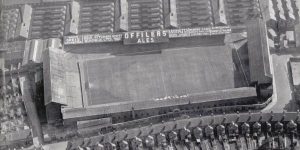 An early aerial shot of the ground

Almost immediately the club set about making improvements, employing the services of the famed ‘football architect’ Archibald Leitch to design a new main stand which became known as the B Pavillion. The new design included offices and dressing rooms underneath which meant that, for the first time, the players emerged from the centre of the stadium rather than from one of the ends. Next, a roof was put over the popular side and for many years an advert on the top of it proclaimed the virtues of ‘Offiler’s Ales’.

Development continued in the 1930s with the construction of a double decker stand at the Osmaston End. A section in the north-east corner, known as ‘Catcher’s Corner’ from the baseball days remained uncovered. Next came work at the Normanton End Stand in 1935 with various constructions raising capacity at the stadium to 38,000.

The Osmaston End was damaged during an air raid in 1941 and remained out of commission, considered a danger, for some time, although many fans ignored the warnings and took their chances, taking up their usual positions there. 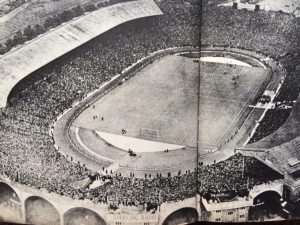 After the war Derby suddenly became a team to be feared. The combination of Raich Carter and Peter Doherty was a match for the very best and these two led the team to victory in the 1946 F.A. Cup. When Doherty left he was replaced by British transfer record breaker Billy Steel who was a gifted and inventive player, just like the Irishman. 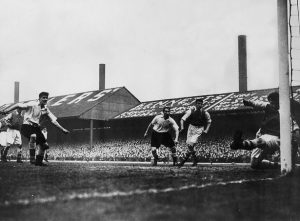 Jack Harrison scores the only goal against Arsenal in 1947

Steel and Carter inspired Derby to another fine up run in 1948 where they were eliminated by eventual winners Manchester United at the last-four stage. Then Carter left to take up the player-manager’s role at Hull City and County were forced to break the transfer record again to replace him, splashing out £24,500 for Johnny Morris.

But after Steel was sold to Dundee in 1950 things went downhill quickly and the club found themselves in the 3rd Division (North) by the mid-1950s.

In the late 1960s the club were again offered the chance to move to the Municipal Sports Ground but they again chose to stay put and, apart from the installation of floodlights the ground hardly changed at all until the construction of the aptly named Ley Stand (the ground was still adjacent to Ley’s Malleable Castings). 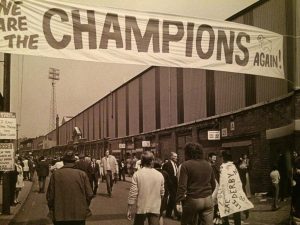 The early to mid-1970s were undoubtedly the golden period for the club. Under the leadership of first the mercurial Brian Clough – Peter Taylor partnership and then with the redoubtable Dave Mackay at the helm, Derby won two titles and also played classic European ties against the likes of Juventus and Real Madrid with the Baseball Ground rocking. 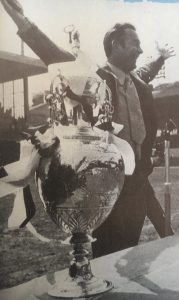 The new construction brought the total capacity to over 40,000 for the first time and the attendance record was set in 1969 when 41,826 crammed in to watch a game against Tottenham Hotspur although, it has to be said, it was a pretty tight fit! The success the club were having gave them the opportunity to sell two-year season tickets.

Sadly, after that second title things went downhill on the pitch, and the downward spiral off it quickly followed. Crowd trouble helped bring about dwindling attendances and recommendations from the Taylor Report made things very difficult for a tight and piecemeal built stadium. All-seater attendance was eventually reduced to 18,300 and despite initially coming up with plans to rebuild the Baseball Ground it was eventually decided that the club should move.

The club announced that they were going to move to a new stadium at Pride Park and this coincided with improved form. Jim Smith guided Derby back into the top flight and the last season of football at the Baseball Ground was also the first season of the Premier League. The last match at the stadium saw Arsenal visit and win 3-1, Dennis Bergkamp closing things out with a memorable goal. 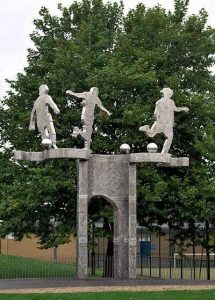 The monument to Steve Bloomer

After being used for reserve games for a few seasons the Ground was eventually sold for property development and the only reminder that is was once the club’s home is a statue of three footballers. 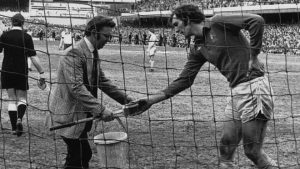 So what about that notoriously muddy pitch? The ground was below street level makin drainage virtually impossible. Bob Smith, head groundsman from 1964 to 1984 said; “Any water on the pitch was like putting water in a saucer of flour. It went gooey. 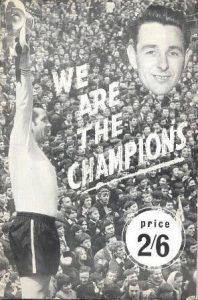 Smith, pictured above repainting the penalty spot during a match against Manchester City confessed that conditions were often ‘made to order’ by Brian Clough who felt that his team were suited to playing on muddy pitches; “Every big game we would flood the pitch,” Smith added. “No one got why it was just wet for first team games and dry for the reserves.

“What went off behind closed doors got Derby County where they were”.

Clough had said when he was appointed; “I’m not here to be popular, If they wanted someone like that they should have got Bruce Forsyth”. He certainly was popular and there was an outcry when he left, but luckily for the club Mackay as his successor continued the winning ways.

There was no doubt that the Baseball Ground had a special atmosphere. For night matches, with sparks flying from the foundry and fumes filling the air, along with the constant ‘almost unfit’ state of the pitch there was a special feel which in all likelihood won Derby a few points. But the tiny footprint of the ground made it impossible to continue there, leaving fans with memories of Bloomer, Steel, Carter, Doherty, Mackay, Clough, Hector and those special nights.

Many thanks to Andy Ellis for the use of photos as indicated. Visit www.derbycountycollection.org.uk for more info